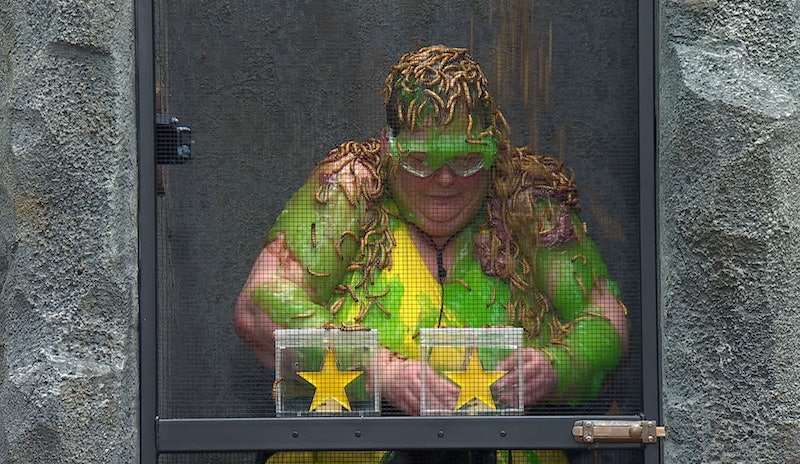 The 18th series of I'm A Celebrity Get Me Out Of Here is well underway, and already viewers have been treated to some typically terrfying, and of course entertaining, Bushtucker Trials. Each night one unlucky celebrity is selected by the public to take part in a trial which are usually filled with creepy crawlies. But where do they get the bugs from on I'm A Celebrity?

I have reached out to ITV for comment on the matter, and will update with any information when it becomes available, however, according to the Metro, the hit reality show occupies its very own "farm" in which bugs and animals are bred specifically to be used throughout the many trials. It is also reported that some of the creatures included throughout each series are "modified" to make sure they are safer when around the celebrities.

A spokesperson for the show previously told Bustle that it takes the welfare of animals and insects used in trials seriously. “At each of the Bushtucker Trials, which feature animals or insects, we have qualified and experienced animal and insect handlers on site and every trial has been carefully tested and developed," the spokesperson said.

Previously, there have been reports that some of the vegan campmates would be exempt from taking part in the infamous eating trials, which see celebrities much on jungle treats including kangaroo testicles, cockroaches, and sometimes worse. These claims, however, were recently been disputed when some campmates who had been reported to be vegan were seen eating meat on the show.

According to the Metro, the 2014 X Factor runner-up Fleur East is actually the only self-identifying vegan in the 2018 series - and she has insisted that she will eat anything presented to her during the challenges. In previous years, the long-running ITV show has included vegan campmates, most recently when comedian Shappi Khorsandi entered the jungle back in 2017.

Khorsandi only became a vegan shortly before entering the I'm A Celebrity camp, and stated that despite her new dietary requirements, she would indeed eat meat both in camp, or during a trial if she was required to do so. After leaving the camp, however, the comedian revealed that she was provided with secret parcels of food after falling ill whilst attempting to eat the same meals as her fellow campmates.

When speaking of her experience as a vegan in the jungle, she said: "The worst thing that happened to me was I thought 'Come on, it’s not a religion,'" and continued "So I had meat and I was really, really physically sick – five times in one hour. It was horrible and then after that I asked for vegan food and they were very accommodating, it was fine." As reported by the Metro, vegetarian campmate, James McVey, will receive a veggie option whenever food is delivered to the hungry celebrities during this years series.

So far, viewers of the hit reality series have witnessed the Bushtucker Trials of Inbetweeners actress Emily Atack and The Chase's Anne Hegerty, which have included a pit of irritable snakes, and a terrifying chamber. As the series progresses, so will the scale of these trials - which although terrible for the campmates, are definitely one of the best aspects of the show for us viewers. Bring on the next Bushtucker Trial.