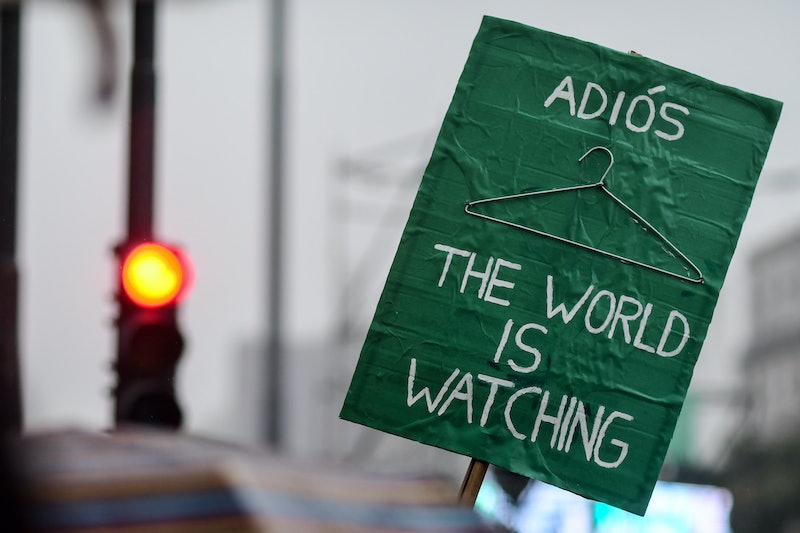 Following a debate that lasted for more than 15 hours, Argentina's Senate decided on Thursday to vote against a bill that would have legalized abortion during the first 14 weeks of pregnancy. However, although the bill did not pass, it signified what Fortune described as a changing tide in Latin America and the Caribbean. At present, only three countries in Latin America permit elective abortions, but attempts to challenge anti-abortion legislation in Argentina, Brazil, and other populous countries have sparked hopes of reform.

There are 33 countries in Latin America and the Caribbean, but only three of them — Cuba, Guyana, and Uruguay — allow elective abortions, which means that they can be accessed in cases other than rape, incest, or threats to a pregnant person's health. According to a March 2018 report from the Guttmacher Institute, of other cities and territories in the region, only Mexico City and Puerto Rico allow elective abortions. The report also indicated that six countries — the Dominican Republic, El Salvador, Haiti, Honduras, Nicaragua, and Suriname — have prohibited abortion altogether, with no explicit exceptions.

According to The Guardian, 6.5 million abortions take place in the region each year, but three-quarters of them are illegal and often performed in unsafe ways. However, rights groups across Latin America are working to challenge the status quo.

Although the bill to legalize abortion didn't pass in Argentina, it passed the lower house, and the country's president had promised to sign it. In Brazil, meanwhile, the Supreme Court held a hearing this past week on decriminalizing abortion up to 12 weeks. Brazil currently only permits abortions to save a woman's life, while Argentina also includes the preservation of physical health. If both Brazil and Argentina were to legalize abortion, approximately two-fifths of women in Latin America would be able to access elective abortions.

As the future of abortion rights in the United States looks more and more uncertain, Latin America has largely joined the rest of the world in expanding the circumstances under which abortion is permitted. However, the widespread illegality of abortions in the region can, in part, be attributed to the influence of the Catholic Church.

Although the percentage of Latin Americans identifying as Catholic has declined since the 1990s, per a public poll in the region, many political parties have seized on and maintained the church's influence. And in Argentina, the home country of Pope Francis, anti-abortion legislators reportedly had the support of the Pope himself, according to Clarín, the country's largest newspaper.

Rights groups are hopeful that Argentina, Brazil, and other Catholic-majority countries will follow the example of Ireland, where roughly 78 percent of the population is Catholic. Back in May, Ireland voted to repeal what The New York Times described as one of the world's strictest abortion bans, in a "rebuke" to the Catholic Church. As Vox pointed out, religious conservatism in these countries is now being contested by increasingly progressive social movements, such as Argentina's #NiUnaMenos movement against gender violence.

Of the three countries that have legalized abortion in the region, Uruguay's policy is perhaps the most progressive; it allows for abortions up to 12 weeks for any reason, but for longer periods of time in cases of rape or health risks. While Argentina, Brazil, and other countries in the region are still actively debating the merits of decriminalizing abortion, countries like Cuba, Uruguay, and Guyana provide the region with examples they might eventually follow.