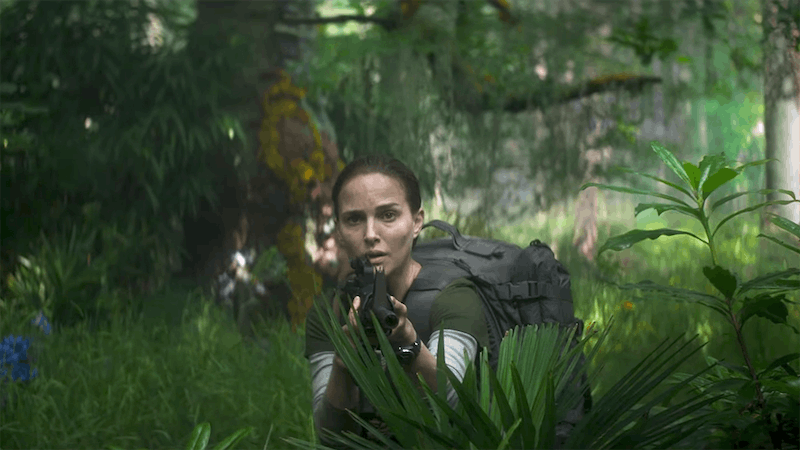 The new movie Annihilation has already captured audience imaginations with its premise — an unknown environment has appeared on Earth, and nothing that's gone in has come back. A group of combat-ready women walk towards a rainbow-slick wall, alien-looking as AI-generated imagery, that marks its boundary. Once through, they find an eerie world where evolution seems to move at a faster pace, and boundaries of species, even of flora and fauna, no longer matter. Known as Area X, the most dangerous thing about the environment is it's growing, threatening to consume everything as it expands. Appearing on U.S. maps and prominently featuring landmarks and distinct ecology, is Area X in Annihiliation based on a real place?

The film (casting: Francine Maisler) is based on a book of the same name by author Jeff VanderMeer, the first of three novels that form VanderMeer's The Southern Reach trilogy. VanderMeer's not shy talking about his love of and fascination with nature, and how it influences his writing. In an article he wrote for Weird Fiction Review, the author explained that his main focus for the trilogy was two-fold: to explore the relationship between humans and nature, and to explore how people react when facing what seems completely alien and unknowable. From the same interview, he elaborated on the human/nature dynamic, saying, "we live on an alien planet filled with incredibly sophisticated organisms that we only partially understand...And so whereas a lot of weird SF seems to be about nature as this threatening Other…I wanted to explore something else."

Even from the film's trailer, we can see the location is pinpointed to the Florida panhandle, as the team examines Area X's growth on a map. Science fiction bound strongly to Earth isn't as common in the genre, but VanderMeer goes a step further by actually focusing on a real ecosystem. In an interview with Eco-Fiction, he said of the story's environment, "I’ve always explored weird real-life biology in my fiction...The Southern Reach is just the most personal exploration. This is largely because the setting is highly personal—North Florida wilderness." More specifically, the St. Mark's National Wildlife refuge, one of the oldest and multifaceted wildlife preserves in the United States.

Located precisely where the film's map shows it to be above, St. Mark's is home to a wide variety of fish, birds, bears, amphibians, and even dolphin on occasion. It's a gorgeous area, the site of of migrating Monarch butterflies and rare Whooping Cranes. Annihilation is so closely based on the teeming ecosystem that Vandermeer was actually worried when submitting the book for publication. In an article for The Atlantic, he feared that, "Maybe the book is just an aimless ramble about four women wandering a facsimile of the 14-mile trail I hike out at St. Marks Wildlife Refuge, complete with abandoned lighthouse."

The lighthouse, whose facsimile features prominently in the trailer, is a prominent feature in the wildlife preserve, and as Florida's second-oldest lighthouse, is a main attraction in its own right. In Annihilation, it's one of the main locations, and becomes a key feature in all three books of the series.

The lighthouse and the preserve are both open to the public for tours and walking, and while there aren't currently any reported mutations, the area is amazingly dense with natural wonders. In his Weird Fiction article, VanderMeer explained that was the reason he felt compelled to write about this ecosystem. "I’ve seen a Florida panther in that place, and turned a corner right into the gaze of a bobcat...and had to jump over an alligator on a raised path with water on either side. It’s a place where you need to live in the moment, and yet can also, by doing so, be transported deep into memory and catharsis."

His choice of setting was also based on the danger the ecosystem faces from current environmental hazards, including the ongoing damage from the Gulf oil spill. Global warming is a major threat, and, without giving too much of the book or movie away, plays into the mystery behind Area X. While the real locale is currently thriving as best it can under current adverse conditions, Annihilation shows us the St. Mark's preserve through a glass darkly. You can see it for yourself when the movie comes out on February 23, 2018.