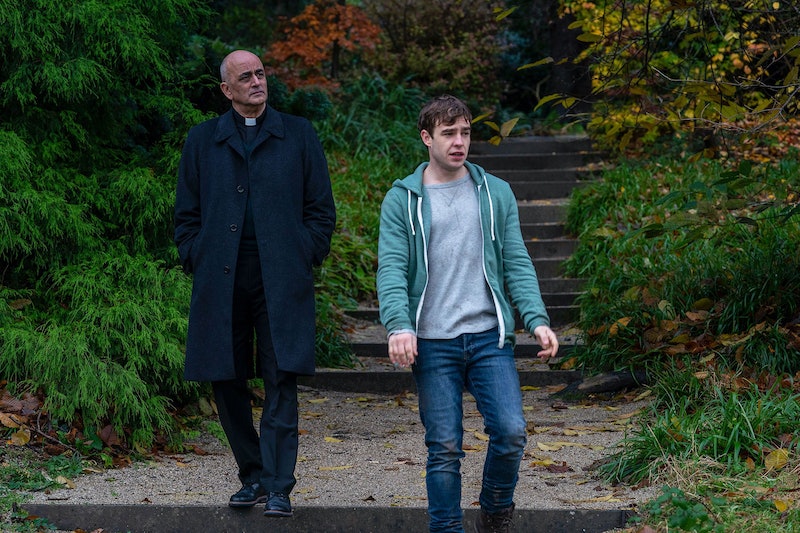 A sordid affair, a twisted love triangle, and a deathly act at the end—Penance is the lusty thriller you need right now. The three-part Channel 5 series is here to keep you more than entertained, and its setting only adds to its eerie feel. But where is Penance filmed?

Julie Graham, Neil Morrissey, Nico Mirallegro, and Tallulah Grieve all star in Channel 5’s psychological thriller Penance. Based on the novel by Kate O’Riordan, it tells the story of a family torn apart by the loss of their son. However, when Rosalie (played by Graham) meets Jed (played by Mirallegro) things go from bad to worse and she ends up doing the unthinkable. While the action on screen is seriously high drama it’s hard not to notice the amazing backdrop. I spoke to Morrissey, who told me that the cast and crew headed to Dún Laoghaire and the surrounding coast in Ireland, and there was no shortage of spectacular sea views.

O’Riordan’s thriller novel of the same name is set in Ireland with the church being a major player in the story, hence the name Penance. A priest (played by Art Malik) provides guidance for the characters, all the way to the end. The scenery is also of significance in the novel, so much so that one of the designs for the front covers features a wide expanse of water.

Dealing with such hard topics as death, adultery, and murder, the cast needed ways to let off steam. While the seaside location made for some hauntingly beautiful shots, it also gave the cast and crew a lot of options for their days off. Morrissey revealed he opted for a Guinness while unwinding, meanwhile Mirallegro and Grieve did things a little differently. Mirallegro tells me “me and Tallulah went salt water swimming. It was a beautiful place.”

Grieve adds that their wild sea swimming was a seriously invigorating experience. “They’ve got lifeguards there and that sort of thing and there’s a railing that goes into it so there’s steps and it’s a really sheltered cove," she says. Adding: "Nico dove in and nodded at me so I jumped in and I screamed. After 30 seconds the adrenaline kicks in.” While the Irish sea looked appealing for Mirallegro and Grieve she says, “we mentioned it [to Graham and Morrissey] and I think they very much thought we’ll leave you to it.”

The final episode of Penance airs on March 19. on Channel 5 but you can catch up with previous episodes on the broadcaster's streaming service My5.

More like this
Adam Ali Hopes 'Waterloo Road' Will “Subvert” Queer Misconceptions
By Sam Ramsden
Rupert Grint Just Shared A *Major* Update About Ron Weasley’s Future
By El Hunt
Theo James Would “Love” To Star In George Michael Biopic
By Sam Ramsden
'The Last Of Us' Has Officially Been Renewed For Season 2
By Darshita Goyal
Get The Very Best Of Bustle/UK
Sign up for Bustle UK's twice-weekly newsletter, featuring the latest must-watch TV, moving personal stories, and expert advice on the hottest viral buys.