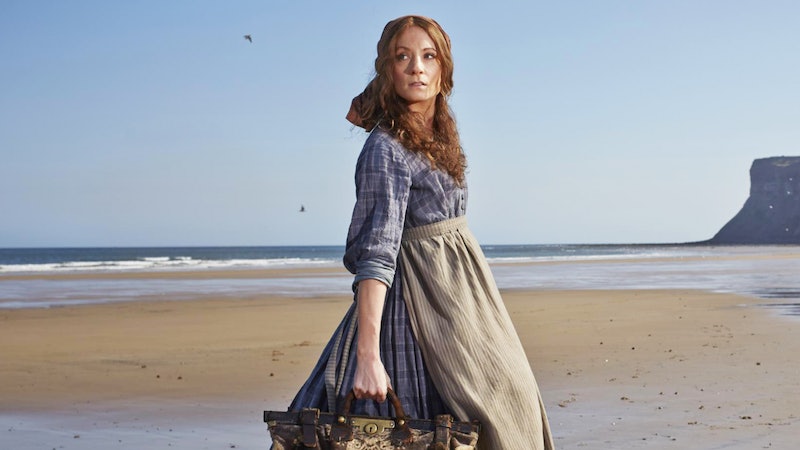 ITV's creepy AF drama Dark Angel is based on the true story of one of the UK's most prolific serial killers, Mary Ann Cotton. A serial killer who stands out not only for her heinous acts but for the fact that she is a truly rare thing — a female serial killer. Cotton lived and killed in the part of the UK she was born and raised in, the North East. And considering how amazingly real the scenes look in this show, the question is where is Dark Angel filmed?

So, according to Screen Yorkshire, the team behind Dark Angel tried to keep things authentic, and the show was filmed largely in the North East. Mainly in Durham and Yorkshire.

However, scenes in Cotton's home town of Seaham, Durham, was in actual fact shot in Saltburn-by-the-Sea, which is a really beautiful seaside resort in North Yorkshire. Saltburn-by-the-Sea is 20 miles from Whitby, which people know best as the town believed to have inspired Bram Stoker to write Dracula.

The Radio Times reports that scenes for Dark Angel were shot in the Beamish Museum. This open-air museum is re-creation of how people lived in the North East of the UK in the 19th and early-20th century.

Joanne Froggatt (of Downton Abbey fame) plays Cotton, and is actually from Whitby herself. The actor spoke to the Radio Times about how delighted she was to be shooting near home:

"It's been lovely to film here. Although Downton Abbey was set in Yorkshire, it was filmed down south at Highclere Castle and Ealing Studios. We've been based in York a lot of the time and I'd forgotten how beautiful it is. We also had a couple of days at Saltburn, which is very close to home. So I got to stay with my parents for a few nights."

So it was a breeze, right? Just head up North and everything looked the same? Well of course not. Producer Jake Lushington explained that, in a way, this was one of the most challenging productions he has been involved with location wise. Speaking to the Radio Times, he made it clear that showcasing scenes of the working and middle classes is far harder than that of the upper classes. Because the average working and middle class areas get refurbished over time and aren't maintained like grand country houses:

"It's very easy to film in a big country house, because most of them still exist. A lot of working class and middle class locations don’t exist. They've been re-developed, done up. Go to the real West Auckland, it’s a rather shiny Farrow and Ball town. Which you would have to dirt and dampen down."

City scenes supposed set in Sunderland were in fact filmed in York as, sadly, Sunderland no longer has any period streets. According to the Radio Times, the jail scenes were shot in the York Castle museum which is conveniently based in 18th-century prison buildings.

Dark Angel showcases how hard life would have been for miner's daughter Cotton. How she rose from humble and hard beginnings to elevate herself to the middle classes. And the evil manner in which she did so.