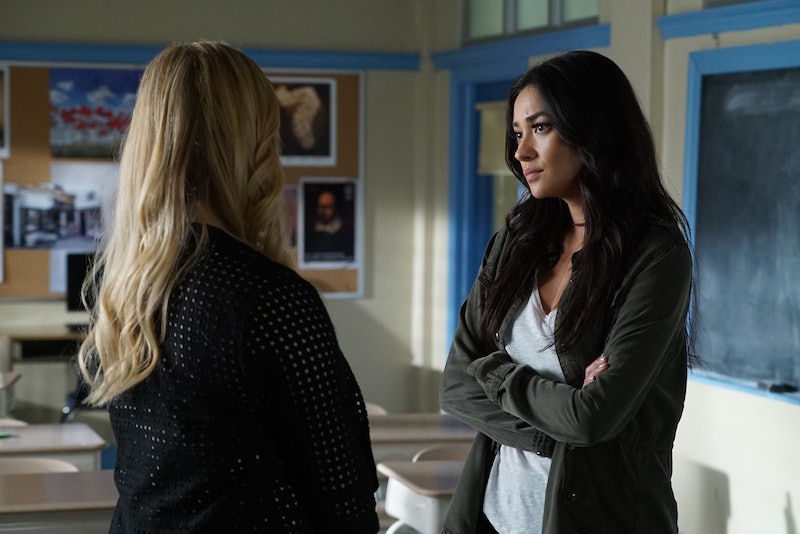 When Pretty Little Liars ended and all of the Liars got their happy endings, it felt like a breath of fresh air. After being tortured for, oh, most of their adolescent lives, Aria, Alison, Emily, Hanna, and Spencer were jumping into adulthood in a way that they couldn't before — they could start marriages, launch careers, raise families, and all of the other things that women their age can choose to do. But nothing gold can stay, and on the PLL: The Perfectionists spinoff, Emily and Ali are not exactly living happily ever after. But where is Emily on The Perfectionists exactly? It's clear she and Ali are on the outs.

Unsurprisingly, Emily still has some issues in regards to what happened to the Liars. Anyone would — they were being chased by a handful of psychopaths for years! We don't know exactly how Emily walked away, but Alison told Mona, “Emily loves me. She just can’t get past the past.” Later, she told Mona that she and Emily are happy, but "then we’re not. It always comes back to trust.” It's cryptic, right?

Showrunner I. Marlene King told TVGuide that Emily and the babies are safe and sound in Rosewood, Pennsylvania (or as safe as one can be, because who trusts that town?), while Alison is in Oregon. It's a bicoastal relationship, and hopefully one with some chance of reconciling. They have children together, after all.

And according to King, we're going to find out why Emison is kaput. "It was really important to me to be true to who they are, and to be true to why they are separated now, and why they can’t be together anymore” she told Refinery29 during a set visit. "I hope that fans are open to the honesty of that relationship, and will embrace how that relationship evolves over these 10 episodes."

Sasha Pieterse, who plays Alison, told Refinery29 that it's natural for a relationship like Alison and Emily's to evolve. "Alison’s grown up, and she’s changed a lot, and relationships change. It’s realistic," she said. "There are some things that happen in people’s lives that change you, and I think they have been through a lot. But, they still love each other."

OK, but will we see Emily? Last year, Shay Mitchell, who plays Emily, told TVLine that her lack of participation in the project had a lot to do with scheduling, but, uh, what about now? Shay's The Heiresses isn't happening, so she may have some time to reunite with Alison, or at the very least bring the babies to Beacon Heights. If they're anything like their moms or their Aunt Mona, they can probably solve some crimes by now, too.

For now, fans of Pretty Little Liars and The Perfectionists will have to focus on the murders and other drama that's taking place in Alison's new home — these women certainly attract attention and infamy everywhere they go, so if anyone can get to the bottom of just what's happening at BHU, it's Ali and Mona. Emily, for now, will have to wait.