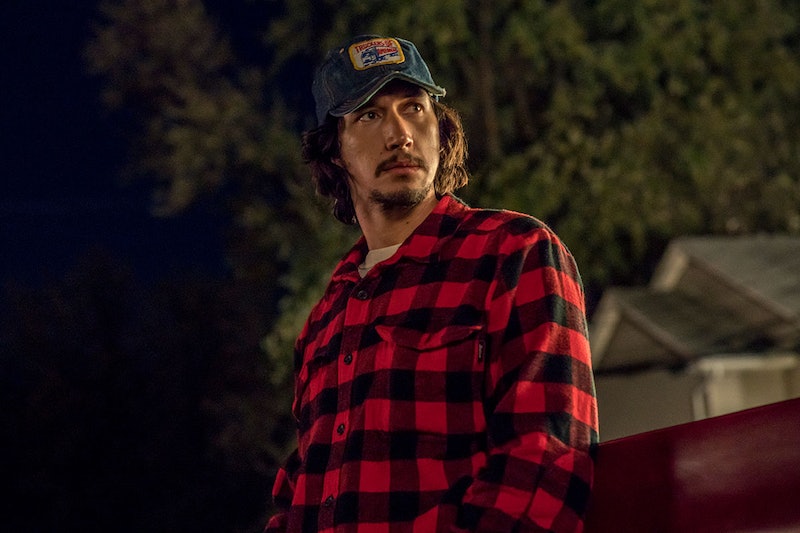 They say truth is stranger than fiction, and that expression has perhaps never been more evident than in the new Spike Lee film BlacKkKlansman. The movie tells the true story of how a black police officer, Ron Stallworth, managed to infiltrate a Colorado chapter of the KKK in the 1970s with the help of a fellow white officer named Flip Zimmerman. It's based on the 2014 nonfiction book Black Klansman by Stallworth, who has been making media appearances lately in order to promote the film. But his former partner has yet to make any public showings, so where is Flip Zimmerman in 2018?

That question is impossible to answer, because Flip Zimmerman doesn't exist... or at least, no one by that name exists as it relates to this story. The name was created for the film, where he's portrayed by Adam Driver, because the real name of Stallworth's former partner has never been publicly revealed. In Stallworth's book, he's called "Chuck." So who was this guy? Not a ton is known about his personal life or where he could possibly be today (if he's even still alive), but what is known about Chuck, or Flip Zimmerman, or whatever his name is, is that he was an integral part of Stallworth's infiltration into the KKK.

Stallworth joined the Colorado Police Department in 1978 as their first-ever black officer, and it didn't take him long to make an impression. After seeing a recruitment ad in the newspaper for the KKK, Stallworth called the number in the listing and posed as a racist white man who was looking to join their organization — he even used his real name — in order to gain intelligence about any potential crimes they were planning to commit.

Things progressed between Stallworth and the KKK in their phone conversations, and the officer eventually realized he would have to meet the racists in person. As a black man, he obviously couldn't show his face to them, so he recruited "Chuck," an undercover narcotics detective whom he considered a friend in the department, to pose as the "White Ron Stallworth" during all in-person meetings with the Klan. This went on for seven and a half months, and the Klan never caught on that they were interacting with two different people claiming to be Ron Stallworth, according to what Stallworth told NPR's Scott Simon in an interview this June.

"None of these guys were, as I say in my book, the brightest light bulbs in the socket," Stallworth told NPR. "Because if they were, they would have known that they were talking to two different people — one on the phone and one in person — because my voice and Chuck's voice sound nothing alike. But they never picked up on it in seven and a half months of phone conversations and periodic face-to-face meetings with Chuck."

During the operation, Stallworth and Chuck managed to thwart three cross burnings, learned the identities of several Klan members — including some higher-ups in the U.S. Military, and discovered plots to bomb a gay bar and steal weapons, according to Australia's ABC News. It ended after Stallworth was offered the chance to become the leader of his local KKK chapter, as the police chief became worried that word would get out that the force had members in the KKK.

Flip Zimmerman may not be an actual person, but the mystery man he's based on was an important contributor to what has to be considered as one of the wildest police operations in this nation's history.

More like this
Letitia Wright's Aisha Encourages A Vital Conversation Around Immigration
By Maxine Harrison
Jodie Turner-Smith & Joshua Jackson's Relationship Timeline Includes Her Proposing
By Jake Viswanath
J.Lo Wants To Make A Sequel To This Movie With Ben Affleck
By Jake Viswanath
This James Bond Event At Abbey Road Studios Was A 007 Fan's Dream
By Samantha Rollins
Get Even More From Bustle — Sign Up For The Newsletter