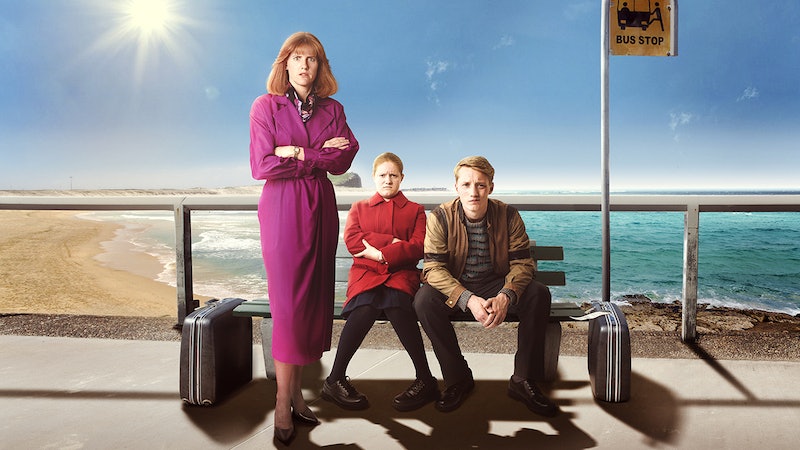 In a world filled with so much uncertainty, chaos, drama, and nonsense, it's easy to look to the past and kind of romanticise it a bit. Which is why shows set in the past are a bit fun right now. If only for the outfits. Even better if the production in question is more on the funny than the maudlin side of things, and Sky Comedy's new offering is not only funny in terms of '80s fashion but also a story that's darkly hilarious. So where is Frayed filmed? And how much fun do you reckon the costume department had on this job?

The new show is coming to Sky One and Now TV and is hot on the heels of what seems to be an ever increasing catalogue of incredibly brilliant comedic output from the broadcasting giant. This time round, they're co-producing it with Sharon Horgan's production company Merman, as well as Australian broadcaster ABC. So, as you might have guessed, this particular show has its feet firmly in both the UK and Australia. And according to the Newcastle Star, the show was filmed in London, Sydney, and Newcastle. And, no, it's not the Newcastle you're thinking of. It's a small city just north of Sydney in New South Wales.

Sarah Kendall, who plays the series' leading character, Sammy, and also created and wrote the show, told the newspaper: “I just wanted to visit my family in Newcastle but I ended up shooting a six-part comedy here ... I’m incredibly excited to be given this opportunity. And I also love free flights.”

According to the Guardian, the Sammy's experience as an Australian expat who moved to the UK. Successfully climbing the social ladder, finding herself a rich husband, living in a fancy house in London with their two children. Her whole life is maintaining the glorious house, the staff, the children. Attending fabulous events and hosting dinner parties filled with fancy food and even fancier people. Leaving her past behind and living her new life to the fullest. However, all of this is turned on it's head when her husband dies. Not only is she left widowed but it transpires bae was keeping the dire state of their financial affairs a secret, and now Sammy is broke.

So, with no husband, no money, no job, Sammy loses everything. Even her home. Meaning she has only one choice. And it's one she never thought she'd have to make. She has to pack her and the kids up and head back to her native Newcastle. A place which she really thought she had left behind forever. Returning to live with her recovering-alcoholic-turned Christian mother. To a town that's decidedly less glamorous than the visions people have from TV shows like Home & Away.

Speaking to the Guardian, producer Celia Mountford explained that the image of Australia in the '80s seemed so glamorous to people in the UK whereas the reality was not all as it seemed:

"Quite often our view of Australia was Crocodile Dundee, Home and Away, and Neighbours. And it was exotic to us because it was sunshine and people spoke differently. Setting Frayed in Newcastle is interesting: we see the beauty of the beaches but we also see an ugliness there."

And Kendall was keen to pick up on this, wanting to tell a story that was funny but also dark. Speaking to the Scotsman, she explained how she overcame the challenges of merging laughter and darkness in a script:

The show is in six parts and will have you hooked from the very beginning.

More like this
Tom Sturridge & Alexa Chung Are Enjoying A Summer Of Love
By Frances Stewart
At 28, Lesley Manville Was Acting, Picketing, & Singing Kate Bush Songs
By Olivia-Anne Cleary
Leaving Corrie Helped Michelle Keegan Make Her Millions
By Maxine Harrison
The Bestselling Novel 'The Doll Factory' Will Be Adapted Into Thrilling TV Series
By Catharina Cheung
Get The Very Best Of Bustle/UK