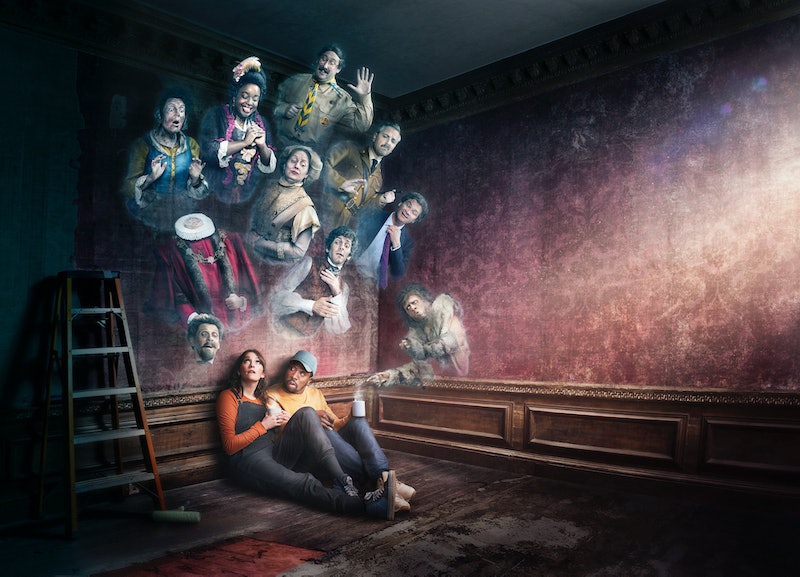 Anyone who's anyone read Horrible Histories back in the day were no doubt elated when the BBC brought out a TV adaptation based on the books. And now there's something else to get excited about. The Horrible Histories writers have recently made a more adult sitcom, Ghosts, that is all kind of LOLs and soon to be your favourite show. And with such a seriously gorgeous building at the heart of the narrative of the show, viewers will be dying to know, where is Ghosts filmed?

I contacted the BBC about this and they kindly informed me that the show is filmed in West Horsley Place in Surrey. The beautiful house is not only perfect for the show because of how gorgeous it is, but also because of its rich history. There has been a house on that property since Saxon times, but the manor house dates back to 1425, according to the official website for West Horsley Place.

Special visitors to the house in the past include Henry VIII, who is said to have eaten a 35 course lunch courtesy of his pal Henry Courtenay. A fitting gift for the king who had just gifted him the old pile. Records remain of the feast and, according to West Horsley Place, it looks like the ground's animals had a rough week population wise:

Other owners (who managed to maintain their heads) include Carew Raleigh, the son of Sir Walter Raleigh. The property is now owned by Bamber Gascoigne, the man who used to host University Challenge.

Sadly though, the house is currently on Historic England’s At Risk Register, and the manor and it's outbuildings are in a very bad state of repair. The Mary Roxburghe Trust looks after the house and outbuildings, trying to ensure it stays around for future generations. However, a sad as it is to see an historic manor crumbling, it serves as the perfect location for Ghosts.

So what's this show all about then Ghosts is the story of a young couple who inherit a crumbling mansion. That's not too bad, right? Well, apart from the fact that along with this pile comes a pile of ghosts. Ghosts who aren't happy about their new roommates, meaning they begin haunting the pair with hilarious consequences.

I know, it sounds scary, but it's actually super funny. Also, it stars a whole host of people you might well recognise from Horrible Histories. Laurence Rickard, for example, who plays Robin and Humphrey's head, spoke to the BBC about how this show is comedic genius:

"All of those house-share sitcoms contain people that are in a situation they are stuck in. Ghosts is the ultimate version of that, they are stuck together for hundreds of years and none of them can leave. Then we realised by having the Mike and Alison characters that they then bring the stakes, the worries about money, life and everything you need for a story".

A show that's a bit creepy and also super funny? What's not to like?