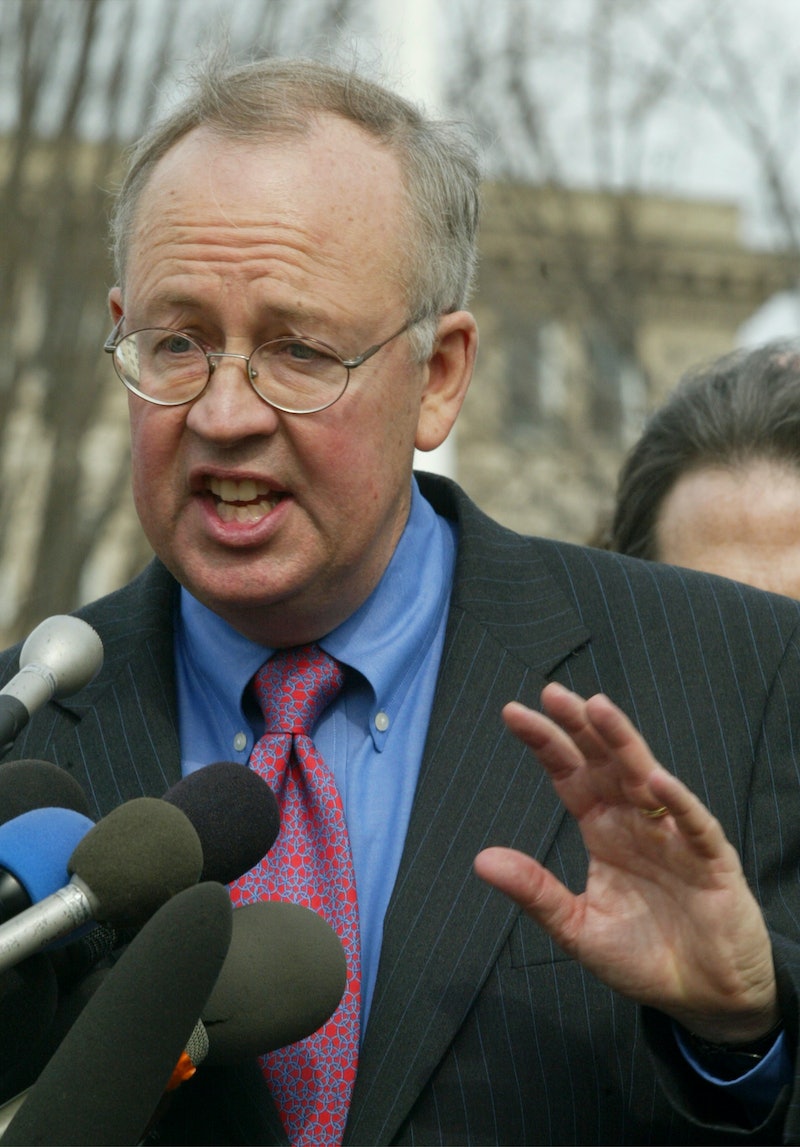 The general consensus on President Trump's appointees is that they have been, at best, a mixed bag. Some picks are par for the Republican course, even uncontroversial full stop. For instance, Secretary of Defense Gen. James Mattis breezed through his Senate confirmation with 98 votes in favor. But those "predictable" types of Cabinet appointments are more exception than rule — think Chief Strategist Steve Bannon, Attorney General Jeff Sessions, Education Secretary Betsy DeVos, Secretary of State Rex Tillerson. All have been met with fierce outcries from the public at large. And it looks like the president might be adding one more name to the protest list — Ken Starr may join the Trump administration.

For those of us old enough to remember, Starr first became a known name during the impeachment proceedings against President Clinton. Appointed as a special prosecutor to look into the Whitewater scandal that had dogged the early years of Clinton's presidency, Starr found no evidence of guilt. But he was contacted by Linda Tripp, who leaked the details of Clinton's affair with Monica Lewinsky. Starr switched gears, and turned from Whitewater to investigating blue dresses and presidential perjury.

As a result, Clinton became only the second president to be impeached. Ken Gormley, author of The Death of American Virtue: Clinton vs. Starr, believes that the event sparked America's current hyper-partisanship. "This is the beginning of the sharp division of red and blue."

But shockingly, the impeachment is no longer Starr's biggest scandal. The former prosecutor became president of Baylor University in 2010. His tenure there coincided with the rising fortunes of its Big 12 football team. The largest Baptist school in the country pumped huge amounts of money into its flagging football program, and the payoffs were tangible. In 2011, quarterback Robert Griffin III became the first player in Baylor history to win the Heisman trophy. Former head football coach Art Briles was reportedly making up to $6 million a year.

But in the spring of 2016, both Briles and Starr lost their jobs. After reports surfaced that claims of sexual assault at the hands of Baylor football players had gone either ignored or improperly handled, Briles was let go by Baylor, and Starr was demoted. Three different women had appeared earlier in the year on ESPN, saying that their reports of being sexually assaulted by a former Baylor defensive linebacker had been ignored. (The accused man is now in jail for sexual assault.) As the New York Times reports, an investigation into the allegations revealed in one case that "university administrators discouraged an accuser in a manner that 'constituted retaliation against a complainant for reporting sexual assault.'"

And the story remains not only fresh in many minds, but ongoing. In late January, a woman sued Baylor, alleging that football players there were responsible for 52 rapes in four years. While this accusation is by no means proven, recent texts allegedly sent by Briles would suggest a culture intent on covering up for the illegal activity of its players.

So why would Trump want to employ Starr as the ambassador for religious freedom? Starr appears to bring nothing but baggage, and very recent baggage at that, to his potential role as head of the Office of International Religious Freedom. In a recent interview, Starr had to be coached in order to quit implying that he might have seen an email a former student sent him with the subject line: "I was raped at Baylor." If he isn't intentionally complicit in the sex scandal (and he might be), at the very least this man seems egregiously incompetent.

Why Trump is considering Starr may not be an immediately answerable question. What we will soon know is whether or not the former prosecutor and university president is in fact offered the position.