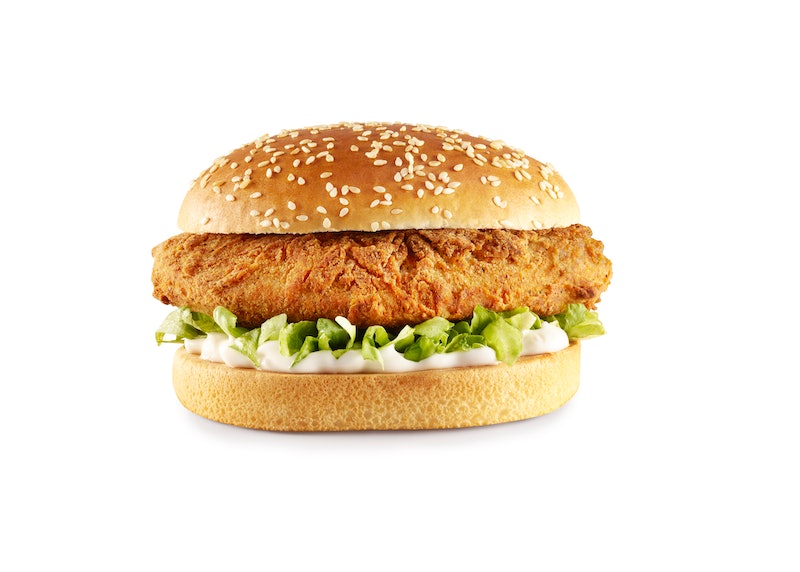 Veganism is most definitely on the rise. Proving it is absolutely not a fad or trend, increasing numbers of people are favouring the vegan diet. Or at least open to eating less animal products in their day to day life. In the past, one of the main things vegans would struggle with was meal choices in restaurants. Especially the fast food variety. I mean don't get me wrong, everyone loves chips but guys, even chips get boring if that's all you can eat. So news that KFC has a new launch is pretty major. So where is KFC's vegan burger available? It's basically like the Red Sea parting and all the vegans using it as a shortcut to KFC.

OK maybe that sounds a bit dramatic but guys, having a vegan option that is actually delicious and not just chips is mind blowing. Now prepare to have your mind blown further as I describe this yummy treat which will have even the hardiest carnivores drooling.

The burger is to be known as the "Imposter Burger". Which sounds about right in a fast food chain made famous for its chicken. But bye bye chicken, this burger is lit. Even more so as it is a vegan version of their classic Original Recipe Fillet Burger. Yep, no weird alternative option that doesn't even taste nice. This one will have the same batter, same bun, but none of the cruelty to animals, and cost you only £3.79.

KFC spilled the beans about the new burger in a press release sent over to Bustle UK HQ. I would recommend that you put on your drooling bib before you get to reading this because guys — this is so lit.

The burger is being trialled for four weeks initially to see how it goes down with customers. Starting from June 17, consumers in London, Bristol, and the Midlands will be able to hang a fang on this quorny vegan goodness. OK so that is four weeks to get to eating a heck of a lot of Imposter burgers and bigging it up for the vegan fam.

You will be able to find it in the following branches.

Lots of fast food chains have been waking up to the fact that people just don't want to eat food that is harmful to animals and the planet. Take for example Greggs, who launched their vegan sausage roll. Which has been an absolute rip-roaring success. Owing partly, I can only assume, to me hooning them like they are going out of fashion. And honey, not only are they not going out of fashion — they are not going anywhere.

Especially considering the massive boost in sales Greggs has experienced, which is being reported by the Financial Times.

Hopefully enough people will devour the new vegan burger and increasing numbers of eateries will do the right thing and provide vegan options for customers.