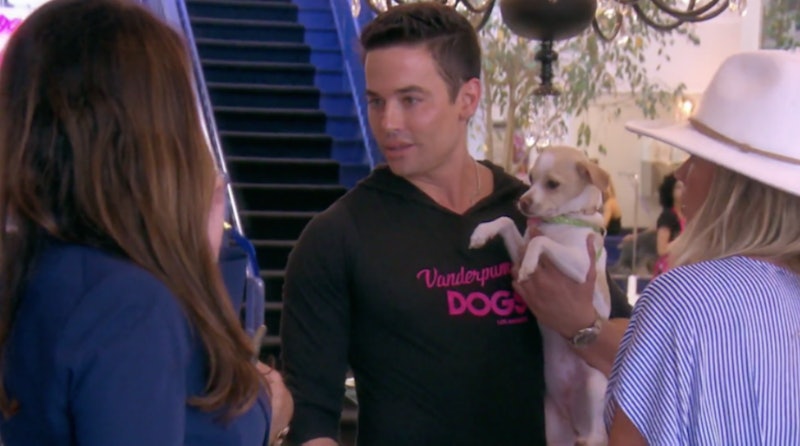 Never before has an animal caused so much drama on Real Housewives of Beverly Hills. (Unless we're counting Season 7's stuffed bunny debacle.) But, alas, Season 9 of RHOBH has mainly centered around what many fans are calling PuppyGate. Or the drama surrounding housewife Dorit Kemsley adopting a dog from fellow housewife Lisa Vanderpump's foundation, Vanderpump Dogs. Scandal struck when after allegedy biting Dorit's husband PK and their two kids, Lucy Lucy Apple Juice ended up in a non-Vanderpump shelter. The now-famous Chihuahua mix has caused quite the stir, and fans are wondering where is Lucy Lucy Apple Juice now. Clutch a glass of Vanderpump Rosé and prepare to find out.

People Magazine exclusively spoke with the pup's new owners and not only is the unofficial star of the hit Bravo series got a new home, but a new name. Her new moniker is Lulu and according to owners Zandria Theis, 22, and her boyfriend Reed Thompson, 35, she is living her best life. (As she should after after all of this trauma, to be honest.)

Theis told People that Lulu "is the sweetest dog ever, we are really happy we got to add her to the family." She added: "Our lives revolve around her now."

It seems that a few Housewives' storylines this season have also revolved around the pooch. After Dorit gave the dog to what she believed to be a trusted new owner, the pet somehow ended up at a shelter, and once there was scanned for a microchip. When the microchip held contact info for Vanderpump Dogs, Lulu was returned there. But once Lisa found out and fellow housewife Teddi Mellencamp got involved, seemingly everyone formed an opinion on who was to blame for the mix-up. Weirdly printed-out text chains, testimony from Vanderpump Dogs employee John Blizzard, and lots of questions followed.

But for Theis, a new name meant a fresh start for Lulu and the owner hasn't been really following the onscreen chaos surrounding her pup. She told People that while she had never seen the show before, she watched the first episode, before stopping. (Can you imagine?!) "I don't need to add any extra drama to my life than I already have," she told People.

It actually makes a lot of sense that both Theis and Thompson would want to avoid the controversy. Thompson even posted an adorable snap of the two and Lulu last week, writing that the canine "is thriving."

But Theis admitted to People that there was definitely a period of adjustment for Lulu after she was returned to Vanderpump Dogs in summer 2018. Theis's friend and roommate actually worked for the foundation at the time, and wanting to keep the dog in the Vanderpump family, brought Lulu home for Theis and Thompson to foster. "I knew from the second I saw her that we were going to adopt her, but we fostered her for about a month," Theis told People.

"When we first got her, she was extremely terrified of everything," Theis said to People. "I don't know what happened behind closed doors, or at the house where she was at before I got her, but all I know is that when I got her she was terrified."

Theis said that the Vanderpump Dogs staff said this was odd for Lulu, who was born to a rescue dog there in November 2017 per People, considering she had a fantastic track record before she was adopted originally. She had apparently returned to Vanderpump Dogs “a completely different dog.”

But Theis said to the mag that after the couple gained Lulu's trust, she is “happy to let everyone know that Lulu is a perfect little angel.” In fact, the biting accusations seen on the show really upset her, according to People. "This is the one thing that really bothers me. Everyone saying that she bites and that she’s a vicious dog," she said.

"You have to train your puppy that biting is not okay, and that’s what we did," Theis added to People. "Anytime she would play bite, we would go 'No bite!' and now she doesn’t bite."

Now that we are ~finally~ hearing Lulu's side of the story, her owner told People, "It took her months and months of work to get her where she is today, and now she is the perfect dog." While we may be ready for the drama surrounding Lulu to seize on RHOBH, we're not ruling out her own spinoff. It could have a very "New Name, New Me" vibe, right?

She's even got her own Instagram, @whosthelulu. Her bio reads, "Honorary housewife." Do you hear that, Andy Cohen?! It feels like a reunion appearance is needed at the very least. We'll be here, brainstorming potential tag lines. "I was named after apple juice. But now, I'm sipping champagne."