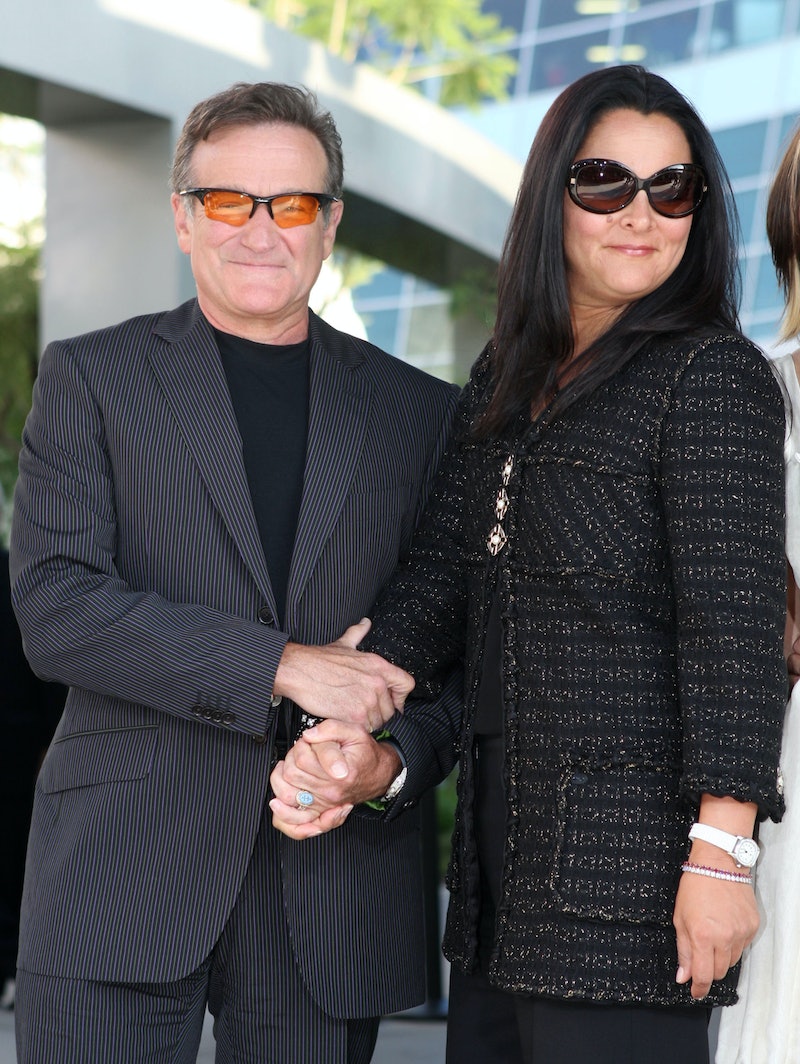 When Robin Williams: Come Inside My Mind premieres on HBO on July 16, fans of the comedian and actor will get a closer look at his life through his own interviews and through the words of some of his colleagues, friends, and family members. But one person who played a lengthy and significant role in his life is not featured in the documentary: Williams' second wife. In 2018, Marsha Garces is still staying out of the spotlight, and lettings others step forward to detail Williams' life and legacy.

Garces was Williams' second wife, who he married in 1989 following his 1988 divorce from first wife, Valerie Velardi. Garces and Williams had two children together, Zelda and Cody. The couple had a long marriage — 19 years at the time Garces filed for divorce in 2008 — but their divorce was finalized in 2010. In 2011, Williams got married for a third time, to Susan Schneider.

While Garces and Schneider aren't in the documentary, Velardi is, and she shares information about her own divorce from Williams. According to The Verge, Velardi says that she and Williams had been split up for a year before he started a relationship with Garces, who had previously been their nanny, even though the press at the time made it seem like he was having an affair.

Come Inside My Mind earned positive reviews overall following its premiere at Sundance in January, but it has been criticized by some for not going deep enough into the psychology behind the sadness Williams experienced during his life. Charlie Phillips at The Guardian wrote, "While it is understandable that close friends and family would not seek to speak ill of him, the film suffers from this unwillingness to pursue darker strands."

It's unclear why Garces and Schneider didn't participate in the film, but it could be that they weren't ready or willing to talk about Williams' passing. In addition, only the actor's oldest child, Zachary, is included; Zelda and Cody are not. As John DeFore at The Hollywood Reporter wrote, "the omissions feel less like a game of access politics ('I won't do it if she's involved') than an understandable reluctance to discuss broken marriages and addiction in the shadow of Williams' untimely 2014 death."

Garces keeps private and has not spoken out about the documentary. It seems the last time she gave a public comment was when she released a statement when Williams passed away in 2014. Garces shared the following statement via the Washington Post:

My heart is split wide open and scattered over the planet with all of you. Please remember the gentle, loving, generous — and yes, brilliant and funny — man that was Robin Williams. My arms are wrapped around our children as we attempt to grapple with celebrating the man we love, while dealing with this immeasurable loss.

When Garces and Williams got married, she started working as his assistant and a producer on some of his movies, including Patch Adams and Mrs. Doubtfire. She continued working as a producer separately, and her latest projects were the 2014 documentary Extinction Soup and a 2015 short, Billy the Kid.

Garces does not have public social media, but her daughter, Zelda, did post about her and tag her in a photo for Mother's Day in May. Zelda wrote in part, "Day by day, slowly but surely, I’m looking and becoming more and more like you...And I couldn’t be more honored. Love you Mushy, with all my you-full heart. Thanks for letting me use your wombBnB for 9months. You’ve had a room in my heartBnB every day since."

Knowing how private Garces is, it's not shocking that she wasn't part of Come Inside My Mind. While fans will always want to know more about Williams' life and his personal relationships, the people involved in those relationships have no obligation to share any more than they want to.