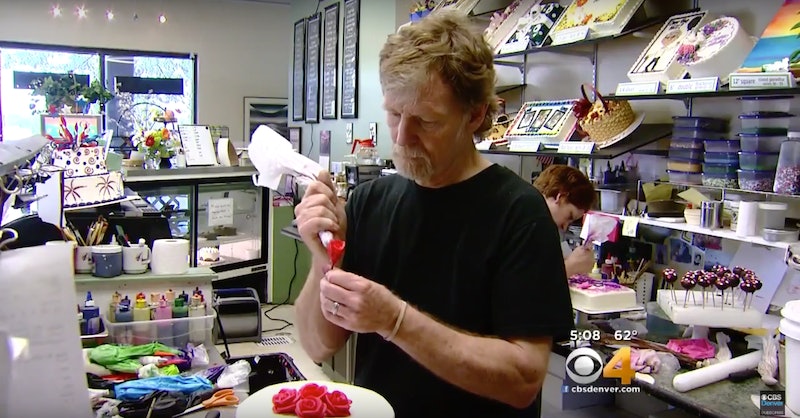 On Tuesday, the Supreme Court will hear the first oral arguments in the case concerning Masterpiece Cakeshop, the Colorado bakery that refused to bake a cake for a gay wedding. The case has raised a number of important legal questions — is the case about free speech or discrimination? — but people are also wondering about the bakery itself, and how its Lakewood, Colorado roots helped shape the case.

Same-sex marriage has been legally recognized in Colorado since October 2014. The state's constitutional ban on same-sex marriage was struck down in the state district court on July 9, 2014, and by the U.S. District Court for the District of Colorado on July 23, 2014. But even before gay marriage was legal, discrimination based on sexual orientation was illegal. Longstanding Colorado state law prohibits public accommodations (which, as a business, Masterpiece Cakeshop is) from refusing service based on factors such as race, sex, marital status, or sexual orientation.

David Mullins and Charlie Craig visited Masterpiece Cakeshop in July 2012, only to be told that owner Jack Phillips would not bake them a cake for their wedding, due to his religious beliefs. And that, the couple argued in a complaint filed with the Colorado Civil Rights Division (CCRD), amounted to discrimination.

Others, however, say the case is less about discrimination and more about free speech. The Alliance Defending Freedom, which is representing the baker, says on its website that the state of Colorado has effectively forced Philips "to strip every ounce of his faith out of his business." As a result, Philips appealed the decisions of both the Colorado courts and the Colorado Civil Rights Commission, arguing that those findings violate the bakery's rights to both religious freedom and free speech.

The CCRD agreed with Mullins and Craig, though, ruling that Phillips illegally discriminated against Mullins and Craig. The bakery ultimately appealed that ruling and, in 2013, an administrative judge with the Colorado Office of Administrative Courts issued a decision affirming the CCRD's finding. The Colorado Supreme Court said in 2016 that they would not hear an appeal brought by the baker, effectively upholding the lower court's rulings.

Beginning tomorrow, the case will be heard in the highest court in the land: the Supreme Court. Philips and his legal team are hoping that the Supreme Court will find that the Constitution will exempt the bakery from Colorado's anti-discrimination laws.

Though it has anti-discrimination measures in place today, the state of Colorado, where Masterpiece Cakeshop is located, has had a strained relationship with the LGBTQ community in the past. In the 1990s, an amendment that would have invalidated ordinances protecting LGBTQ Americans from discrimination in jobs and housing prompted a boycott of Colorado and cost the state more than $35 million in convention business. Ultimately, the state's Supreme Court found that the measure would effectively prohibit the legal protection of a group of people.

Those advocating for Mullins and Craig say the Cakeshop case is also about discrimination. In a legal brief filed in the Supreme Court, the American Civil Liberties Union (which is representing the couple) argues that "the First Amendment does not give a business open to the public the right to discriminate against its customers in violation of state law."

Melling argues that the case brings to mind a few other historic instances, such as the 1960s case in which a chain of South Carolina barbecue restaurants argued that its owner had the right to refuse black patrons (and to disregard the Civil Rights Act) because his religion was opposed to integration. When the Supreme Court eventually heard the case, they called the religious freedom defense “patently frivolous.”