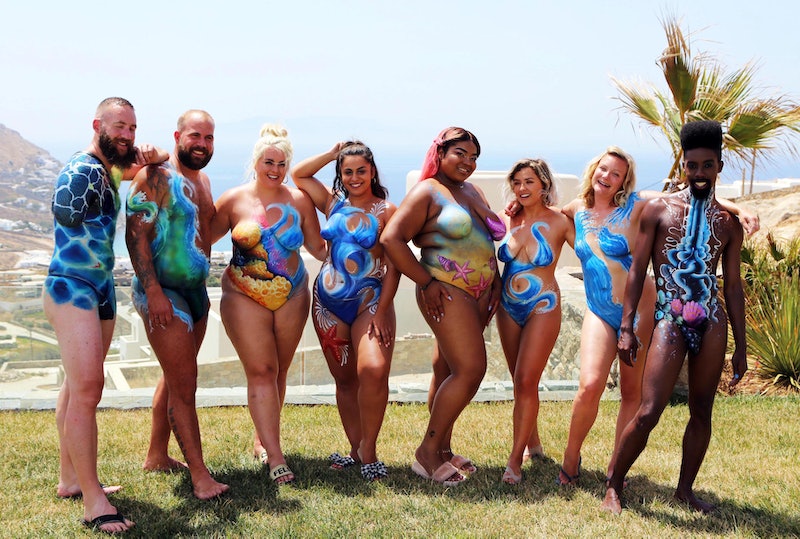 For anyone who feels even slightly uncomfortable with their body, being scantily clothed at the beach can be a challenge. While it's a place where you want to feel liberated, sometimes you can't helped but be bogged down by negative thoughts about your own body. That's why I'm getting more and more into new Channel 4 show Naked Beach, which asks whether this self-consciousness can be overcome by going bold — and going nude. I'm not sure I'd mind living in this nude utopia, and I've been left wondering: where is Naked Beach filmed? I'm starting the summer holiday planning already.

As the Radio Times reported on Thursday, April 18, the "bespoke resort" in which Naked Beach takes place is located somewhere "in sunny Greece." As The Sun stated a week prior, a precise location has yet to be revealed, so I've emailed one of the show's reps to find out. I'll let you know where you'll be booking your summer holiday flights to if and when I heard back.

If you've yet to see it, Naked Beach premiered on Channel 4 on Thursday, 11 March, and each episode is available for you to watch on All 4. Seriously, I highly recommend it.

For those who don't know, the premise of the show is this: four body insecure Brits are flown out to "sunny Greece" and made to mix with four body confident nudists at that "bespoke retreat." When they get there, the four who arrived on the plane will only be permitted to cover up their body parts with paint. They'll spend four days soaking up all the confidence from their liberated resort mates, before they're asked to bare it all on the beach.

The show's currently being heralded as the "antidote to Love Island," according to The Mirror, who recalls how Britain's most famous romantic reality TV how has come "under fire" for its promotion of barely attainable beauty standards. Naked Beach on the other hand is designed to be identified with by any type of viewer, in possession of any type of body. While Love Island gives you the opportunity to ogle at ridiculously beautiful people, Naked Beach gives you the opportunity to see yourself — which just so happens to be ridiculously beautiful, too.

As The Mirror also reported on Saturday, April 6, the show was co-devised as part of an experiment by Goldsmith University's psychology professor Dr. Keon West, who has a theory that: "spending time with nude people of all shapes and sizes rather than perfect ones helps boost your body image, and happiness." Naked Beach is an attempt to find truth in that hypothesis, and so far, it looks to be going pretty well.

The show's in good hands, as it's also being overseen by mental health campaigner Natasha Devon, according to The Mirror's reports. While the mental health of contestants on reality TV shows has become an increasingly pertinent topic, especially in the wake of Love Island's Mike Thalassitis’ passing, it's reassuring to know that this one's been constructed with mental health as its priority.