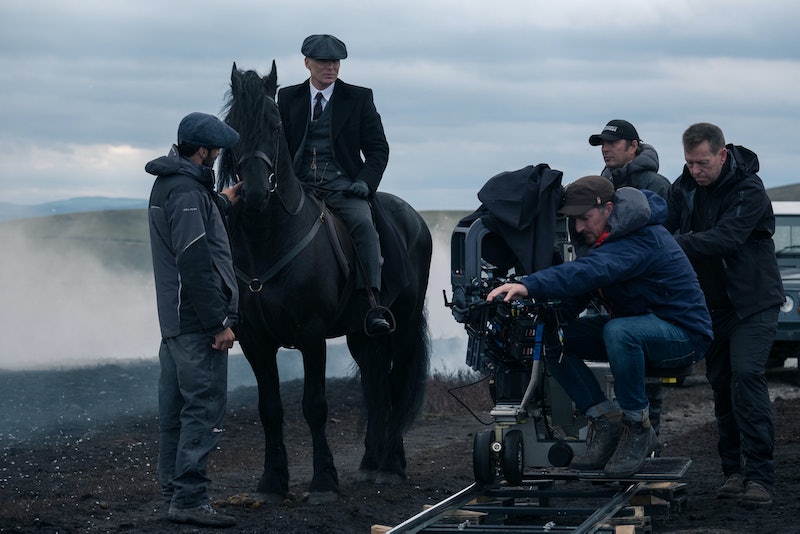 Back for its fifth season tonight, BBC drama Peaky Blinders has captured the nation by its loose depiction of one of England's most notorious criminal gangs. Set in a post-World War I Britain, the show has been highly praised for its realistic production and set design that has enveloped viewers into the dark and seedy underbelly of iconic landmarks, cities, and towns in the West Midlands. But where is Peaky Blinders filmed, and how did the production team turn 21st-century locations into stunningly realistic period settings?

While the series is set in Birmingham, production and filming for Peaky Blinders primarily takes place in Yorkshire, as well as Lancashire and Greater Manchester. "To realise 1919 Birmingham was always going to be a massive challenge. The Birmingham we needed to recreate, due to a combination of the war and town planners, doesn't exist anymore," Frith Tiplady, executive producer of Tiger Aspect Productions told Screen Yorkshire. "We decided that Yorkshire was the best place to base the drama Peaky Blinders."

"A combination of fantastic period locations, great crew and support from Screen Yorkshire and the local council. Most of our filming was in Leeds and supplemented by shooting a couple of key locations in Liverpool and Birmingham."

During filming for the fifth series last year, the cast and crew were seen "outside the Plaza in Stockport and digging in Troy Quarry near Rossendale," as Condé Nast Traveller reports. These settings are "immaculately on-brand for the show, which moves with ease between the grand builds of the industrial age and the dark satanic mills of the era's underclass."

One of the series most prominent locations, The Black Country Living Museum in Dudley, was also used for the fifth series according to Condé Nast Traveller, which series creator Steven Knight refers to as "the home of Peaky Blinders".

"The Black County Living Museum looks like the memories of my parents' Birmingham, even though it's not quite Brum. We film quite a lot there, it's our base for the series. There are lots of little back streets and original workshops which are still working, so it's an amazing place to visit."

The museum, which has been described as "an entire village stuck in a time capsule", gives visitors an intrinsically detailed look into one of the first industrialised areas of Britain.

"Up until the 1950s and 60s, the Black Country preserved the physical, economic and social landscape of the earlier part of the century," the museum's site reads. "Following two major waves of industrial development, the last mine in the Black Country closed in 1968, bringing about the end of a unique area, one that is preserved right here at the Black Country Living Museum for you to explore."

The museum allows you to not only experience a time warp of Industrial Britain, but it essentially provides an authentic on-set experience of Peaky Blinders. Of course, there are numerous other locations where the series is filmed that you can visit, like the Victoria Baths in Manchester, Admiral Grove in Liverpool, Port Sunlight in Wirral, and Arley Hall in Cheshire.

Basically, Peaky Blinders is a series like no other. It's rooted so firmly in preserved British locations that it allows viewers to not only experience the world of Peaky Blinders for themselves, but it also teaches important history about the industrial age and a post-World War I Britain.

More like this
'The Undeclared War' Took Inspiration From This Gavin & Stacey Location
By Maxine Harrison
'Sherwood’s Filming Locations Hold Deeper Meaning
By Rachel Mantock
'Criminal Record' Is The 'Doctor Who' Reunion We’ve All Been Waiting For
By El Hunt
Where Is Oscar Torres In 'Only Murders In The Building' Season 2?
By El Hunt
Get The Very Best Of Bustle/UK