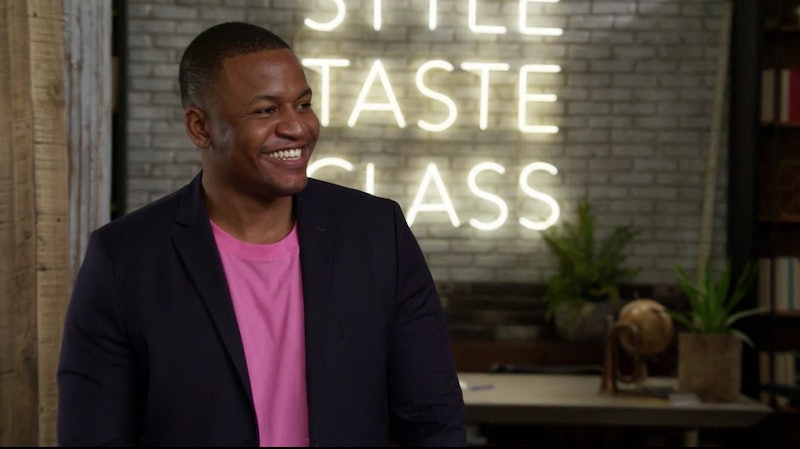 In February, Netflix gave the world a gift and rebooted Queer Eye. In the eight-episode series, a team of professionals stage a self-care intervention for men in need of a lifestyle boost. So, where is Remington Porter from Queer Eye now? There were so many memorable moments from this first season, but one episode that captured viewers hearts was "The Renaissance of Remington." The Atlanta-based entrepreneur took the team's style tips to heart, and from his social media it looks like he's become even more fashionable. He's been keeping up with grooming as well, posting pictures of his most recent haircut on Instagram. In general, Remington seems to be thriving — he's still spending quality time with his lovely mother and sister, eating delicious food with friends, and buying boutique candles.

When viewers first met Remington on the show, he was a bit stuck in the past. He was living in his grandmother's home, which he inherited from her when she passed. The only problem was he never changed any of the decor, which was last updated in the 1970s. He was living in his mother's childhood bedroom — which was decorated with pink, purple, and a forest-wall mural. The decor didn't represent Remington well, and it made him give a disclaimer to women he had over. The 27-year old was also in desperate need of new clothes, cooking tips, and general learning how to embrace his independence. Luckily, the team helped him revamp his life, and it's clear the star leaned into all the advice, especially in the style department.

The new Queer Eye improves upon the concept of the original series, which helped straight men by offering advice on style, grooming, interior design, food, and culture. In the reboot, the Fab Five still have roles - Karamo Brown for Culture, Bobby Berk for Interior Design, Antoni Porowski for Cooking, Jonathan Van Ness on Hair and Groom, and Tan France with the Fashion. The remake has a bit more depth than the original series by no longer being exclusive to straight men and keeping more focused helping men confront their emotions in order to move forward. For Remington, this meant realizing his grief for his grandmother didn't have to prevent him from embracing the future. It seems like all the guys on the show helped Remington a whole bunch, even if Antoni served his family a controversy-stirring a mustard flavored macaroni and cheese with peas.

However, it might just have been Tan's guidance that helped Remington the most in the long run. At the start of the series, he mostly wore gym clothes, much to his mother's dismay. By the end of the series, he had a solid wardrobe of tops, printed button-downs, skinny jeans, and was even dabbling in hats. Since his episode, the star has posted several looks on his Instagram account that show he has spread his style wings. In a post on Saturday, he shared a casual look with skinny jeans, red top, and a green zip-up jacket. The outfit is paired with a fashionable sneaker, and the masterful casual-yet-stylish look would honestly bring a proud tear to Tan's eye.

Of course, the recent selfie wasn't the only fashion #moment that Remington has posted. He also appeared at a Black Panther premiere in a new outfit. In the caption for the post, he thanked the Afro Centric Network, an Atlanta-based boutique with African clothing, accessories, and artwork, for the look. The red-and-black top is paired with a simple straight-leg pant, and some all-black sneaks complete the look.

Tan wasn't the only Queer Eye guy to make an impression, in another post Remington shared a new hairstyle, writing: "Had to get the fresh cut from Rick at @rbbs2006 for my new gig starting on Monday! #NewBeginnings #Haircut #Fresh." Jonathan was pretty happy with Remington's hair and beard situation at the start of the show and mostly encouraged him to get regular manicures and floss. However, he would still be proud to know that the guest was experimenting with his look and keeping up with those grooming practices.

Call Bobby! It's not clear if Remington has continued to personalize his home, but he did post a picture of a sandalwood scented candle that he purchased. The candle is a small act of personalization, but the interior designer would still be impressed.

Perhaps most important of all, Karamo encouraged Remington to move forward, but also keep his bond with his family strong and start new traditions. At the end of the episode, Remington is planning to pick up Christmas Eve dinners with his mother. On Insta, he posted a picture of the two women, captioning it: "My beautiful Mom and Sister!"

While it would be easy for a reality show to do a makeover, it's clear that Queer Eye is even more than that. The new Fab Five teach contestants how to truly invest in self-betterment for the long-term. Remington still seems to be doing well, from his fashion journey to taste in home candle to making new traditions with the fam, and it shows the new reality show is making significant change in people's lives.