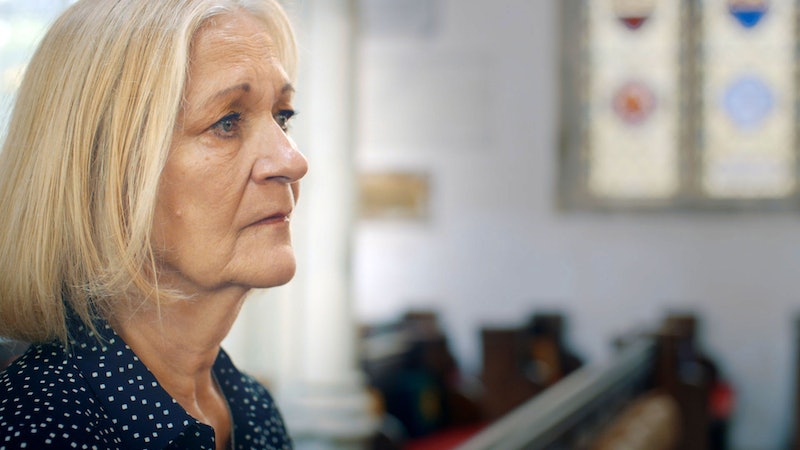 An upcoming BBC Two documentary covers the case of Sally Challen after she admitted to killing her husband Richard back in August 2010. She was first convicted of murder, but the charge was later dropped to manslaughter after her sons campaigned to make it known that her crime was a result of years of coercive control. The appeal went through, and their mother was released earlier this year, but where is Sally Challen now?

After nearly a decade in jail, Sally is now out of prison and back at home with her family. "It's hard to put into words what Christmas together feels like as a family," her son David recently told BBC Newsbeat. Speaking about how he feels right now, David said "I think it's just being happy. For a very long time, we haven't been happy and we get to be happy again."

On the day of her release, Sally issued a statement thanking her family and those who supported her during the case. "My family have served my sentence with me," she said (via the Guardian). "They have kept me going for a long and terrible nine years. I want also to thank my friends in and out of prison who have stood by me."

As Sky News reports, Sally was initially sentenced to 22 years in prison for the crime, but this was reduced to 18 years in November 2011. In February 2019, three judges overturned Sally's murder and a re-trial was set. In June, the conviction was reduced to manslaughter and Sally was sentenced to nine years and four months. However, she was released due to time already served.

As Channel 4 reports, Sally killed her husband "after years of being psychologically and physically abused by him," which her lawyers argued was a case of coercive control. This type of domestic abuse became a criminal offence in the UK in 2015, which is when Sally's sons and her lawyers decided to appeal the original sentence she was given in 2010.

"We don't justify it. She is serving time for a crime. She will serve time for that crime. But that crime needs to be judged properly," David told Sky News before the appeal. "She's not vengeful, she's not jealous, she was psychologically manipulated and that is what coercive control is."

Network Crime + Investigation also notes that "retired forensic social worker Professor Stark" gave an expert opinion during the appeal process, where he explained how years of emotional, physical, and verbal abuse could affect the victim's mind. "[I]n its extreme, coercive control creates a hostage-like-feeling of entrapment, similar to being a prisoner of war," he said.

The network further describes how Richard's murder could have been "a consequence of decades of psychological manipulation and domestic abuse that would have left Sally feeling trapped and unable to escape unless by suicide or murder." After Sally murdered Richard, she made her way to Beachy Head but was talked out of jumping by police officers "for more than three hours," as The Guardian reported at the time.

"I don't know how long he was talking to me, but I remember he just said, 'What about your sons, leaving them behind?'" Sally said during an interview with Good Morning Britain in 2018 (via Metro). "So I didn't [do it.]"

More like this
A New Netflix Doc Will Explore The Unsolved Murder Of Jill Dando
By Sam Ramsden
'The Catch' Revisits A Famed Irish Filming Spot From 'The Tudors'
By Darshita Goyal
6 'Happy Valley' Easter Eggs You May Have Missed
By Sophie McEvoy
'Consent' Is Not Just One Person’s Story, But Hundreds
By Shahed Ezaydi
Get The Very Best Of Bustle/UK
Sign up for Bustle UK's twice-weekly newsletter, featuring the latest must-watch TV, moving personal stories, and expert advice on the hottest viral buys.