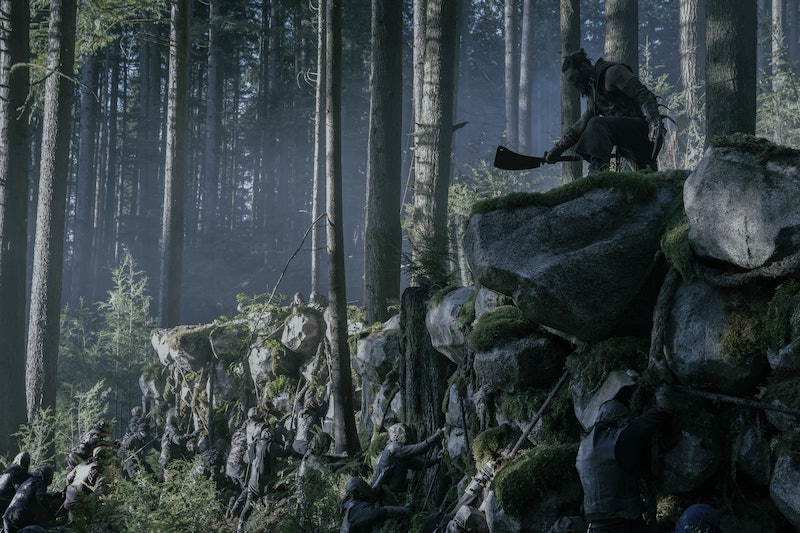 In the world of See, humans lost their sense of sight centuries ago, meaning that they need to use their creativity, resources, and other senses to survive. While some aspects of pre-apocalyptic life are intact — for example, the wealthiest people still have ornate outfits and live in fortresses — most people, like the Alkenny tribe of Jason Momoa's Baba Voss, live strictly off the land. And the filming locations in Apple TV+'s See do this storyline justice.

Although it looks straight out of a storybook, the series was filmed in Canada between Oct. 2018 and February 2019, according to My Powell River Now. The outlet reported last year that the See production company shut down the Ralph River Campground in Strathcona Provincial Park on Vancouver Island in order to film. In addition to that camp ground, Momoa and the series' crew were also spotted around the Campbell River and Myra Falls, also on Vancouver Island, during that time period. The landscape is stunning and accessible to the public when it's not closed for a production company, despite it looking so intimidating and wild in the Apple TV+ series.

While Vancouver is often referred to as "Hollywood North" given the amount of projects that film in the British Columbia area, you'd never know See was filmed there unless you were a true Canadian park nerd. It looks that spectacular. That was the point, according to Momoa, who said in an interview with This Morning that the writer and director of See, Steven Knight and Francis Lawrence, respectively, "didn't want to shoot somewhere that they've ever shot before." It paid off as the forests, frozen tundras, and spectacular water elements lend themselves to rounding out this post-apocalyptic universe.

Not that all of the scenery is totally natural. The Wall Street Journal reports that See cost nearly $15 million per episode to produce, totaling around $120 million for the production of the first season — which is similar to how much HBO spent to make Season 8 of Game of Thrones. Much of those production costs went to changing the natural setting, as Momoa told This Morning that "in some of the opening villages they actually drained a lake," and cleared a number of trees that had been growing in the area. "We built a whole village and they filled it back up when we were gone," Momoa added.

He added that this role is just as unique for him as the filming locations are. Momoa told Uproxx, "I’ve obviously played a lot of the action roles and probably dressed and looked the same, but I’ve never — I feel like in a lot of these roles, they’ve been capped at a certain place. Drogo [from Game of Thrones] was never able to get into a fight, he never really went into battle, he never had a baby, like, he just fell in love. Deckland Harp in Frontier, he never got to see his kids and what it was like beforehand, it was just the death of his kids, and now it’s just his revenge.”

Between Momoa and the rest of the casts' performances, a compelling (and eerie) story, and breathtaking scenery, See will hopefully live up to its ambitious GoT-style budget.