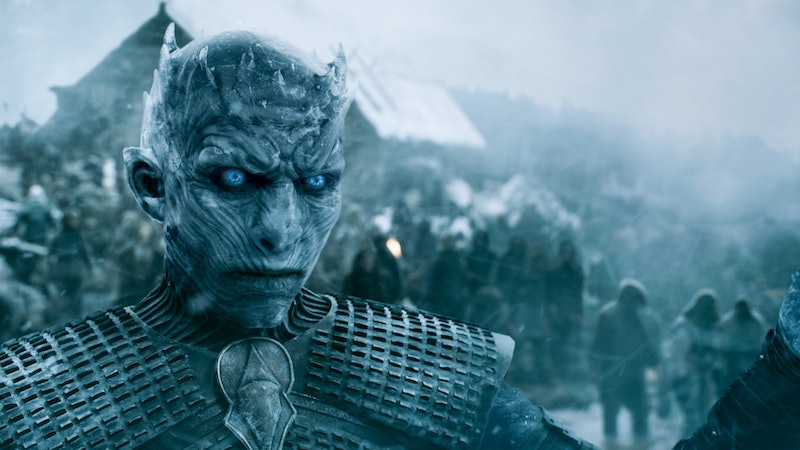 The final season of Game Of Thrones is promising a finale to The War Between The Living And The Dead, showing an army of the creatures showcased in the show's very first scene marching under the guidance of the Night King — so why wasn't this supernatural villain featured in the Season 8 premiere? Where is The Night King in Game of Thrones final season?

Goodness only knows, to be honest. The last time anyone really saw the Night King was when he was riding a zombie-fied, blue-eyed Viserion right though The Wall, blowing it all to pieces with its ice dragon breath. It was ugly, and scary, and everything that Jon Snow had been telling people to worry about. We hear you Jon, things are real now.

To be honest, it makes sense that the Season 8 premiere was lacking in White Walkers, wights, and the Night King. After the final episodes of Season 7 saw most of the series' main characters meet for the first time, the other series regulars were due for a reunion or two. The final season premiere was more about setting the stage for the war to come. Arya and Jon were reunited and showed off their Valeryian steel. Jon found out he was sleeping with his aunt, Dany. And that Dany and Jon might have the best plan for taking on the Dead and Cersei.

The premiere was all about setting the stage for the final five episodes to come — we even got a Euron and Yara sit down! But that doesn't mean that the Night King isn't coming. In fact, with only five episodes to come, he's sure to make his presence known soon enough, walking towards Winterfell with his army of the dead, giants, ice bears, and who knows what else. It doesn't really matter where the Night King is right now, because we're all going to see him soon enough.

And it will be ugly. Showrunners David Benioff and Dan Weiss told Entertainment Weekly that they wanted the Night King to be as otherworldly as possible. "We always liked the implication that they weren’t some kind of cosmic evil that had been around since the beginning to time but that the White Walkers had a history — that something that seems legendary and mythological and permanent wasn’t. They had a historical cause that was comprehensible like the way the wars on screen we’re seeing unfold are comprehensible. They’re the result of people, or beings, with motivations we can understand.”

Which, to be honest, is a good as case as any for absolutely no one — not even Cersei — to end up on the Iron Throne. The Night King and his army of walking dead are real. When he shows up at Jon Snow's door, it's not going to be pretty.