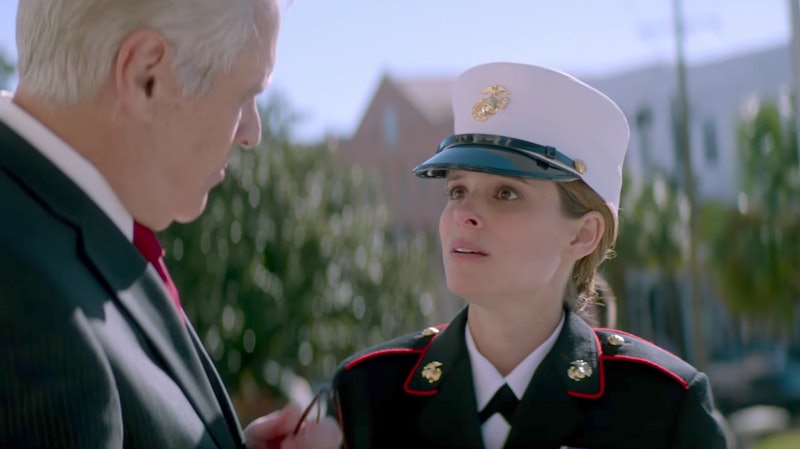 Megan Leavey isn't your typical war movie; after all, it's less about actual warfare and more about the bond between a young Marine and her military combat dog. The Kate Mara-starring film is based on a true story, following the journey of Leavey, a real Marine Corporal who battled depression after losing her partner after several missions in Iraq, and who found surprising friendship with a dog companion. But where is the real Megan Leavey now? Fans will be glad to know that she's living life with a new dog by her side.

The real Leavey is active on social media promoting the movie, which follows her time in war after she was assigned a dog as a partner. Although Rex was notoriously violent with others, he took to Leavey instantly. Together, they carried out more than 100 missions until an IED explosion, and the film shows how Leavey was affected after her honorable discharge while Rex was still enlisted.

Sadly, the soldier is currently living her life without her canine best friend. According to Twitter, Rex passed away in 2013, but is remembered by Leavey every day. She does appear to have a new furry friend by the name of Shadow, and she's posed with the dog in many photos over the past few years.

When she's not hanging with her pup, Leavey seems to be busy attending Yankee games, and supporting active and retired military members. In a featurette for the movie, the soldier talks about her current mission, explaining that she teamed with a private security company in New York working with bomb-sniffing dogs for Yankee Stadium. Talk about coming full circle.

Still, life without Rex must be heard. As the movie shows, it was a challenge to get the brave dog honorably discharged and adopted by Leavey, as she explains in an interview with Fox. In April 2012, the soldier got her wish and was able to bring Rex home. Try not to tear up when you check out her Twitter posts about the event.

Dog owners know how important it can be to have a smart, furry companion by your side. Some people say dogs can help heal depression and loneliness, and for Leavey, having Rex was key to saving her life.