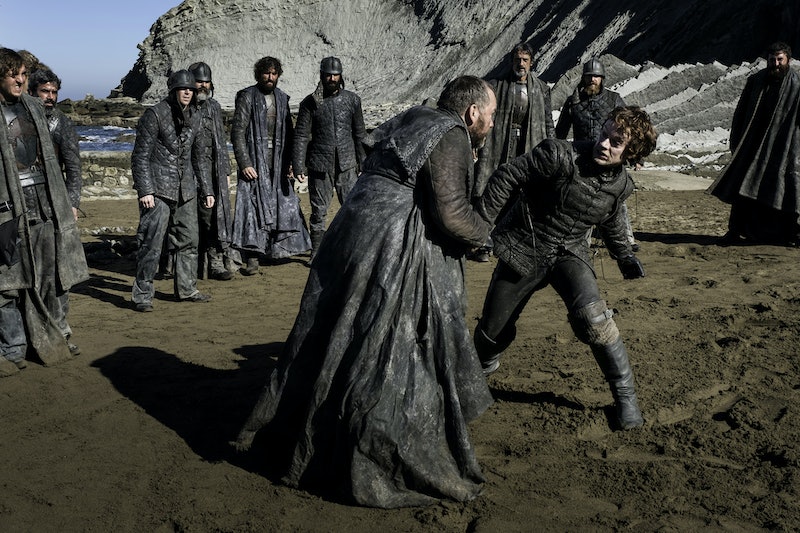 Prince Theon Greyjoy is the son of the late Balon Greyjoy and former heir to the Iron Islands — that is, until he pledged fealty to his sister Yara in Season 7. In the beginning of the series, Theon was Ned Stark's ward, and an ungrateful one at that, always resentful of the fact that he was taken as a hostage to punish his father for rebelling against the Iron Throne. But he's been through a lot since those days. By the end of Season 7, Theon Greyjoy is ready to leave his Reek-ing past behind him and become a true hero. Here's a refresher on where his story left off, before the start of Season 8.

Theon betrayed the Starks in Season 3, and was later captured by Ramsay Bolton, who tortured and castrated him, turning him into the subservient man-creature Reek. But since then, Theon has been on a steady redemption arc: he helped Sansa escape from Ramsay's clutches, and and has been trying to do right by his sister Yara.

As it stands, Yara is queen of a small faction of the ironborn — the ones that aren't serving Euron Greyjoy. This particular faction has pledged itself to Daenerys. They were sailing from Meereen to Dorne when Euron, who's currently Team Cersei, captured his niece's fleet and took her hostage. Theon jumped overboard in fear rather than try to go up against his uncle to save Yara. He was rescued by the remaining sailors from Yara's fleet, who treated him with disgust for his cowardice.

In his final scene of the season, however, Theon works up the strength to confront the raiders, urging them to join him on a mission to save Yara. Their leader, Harrag, tells Theon his sister is as good as dead, and that Theon's the one to blame for leaving her behind.

The two come to physical blows, fighting it out for dominance on the beach in front of the others. Harrag goes in for the finishing blow, kneeing Theon in the groin. Of course, the move has a limited effect on Theon, since Ramsay made him a eunuch. Theon's able to gather his strength and finish Harrag off, finally earning the respect of the ironborn raiders.

He's come full circle: first a sneering young prince who demanded respect he hadn't earned, and now he's turned his weaknesses into his strength and is off to do the right thing.

So what are the odds that Theon will be able to save his sister? There's definitely a parallel to the Ramsay/Rickon situation, in that perhaps attempting to get the hostage back from the bad guy is setting yourself up for failure.

However, Euron isn't Ramsay. He's evil, sure, but only in so much as he wants power for himself. He doesn't seem especially into torture (although rape and pillaging is something he can get into). Therefore, I'd guess there's about a 50/50 chance Theon can actually get his sister back. Although I'd say the odds of both of them making out of Euron's clutches alive are much less likely.