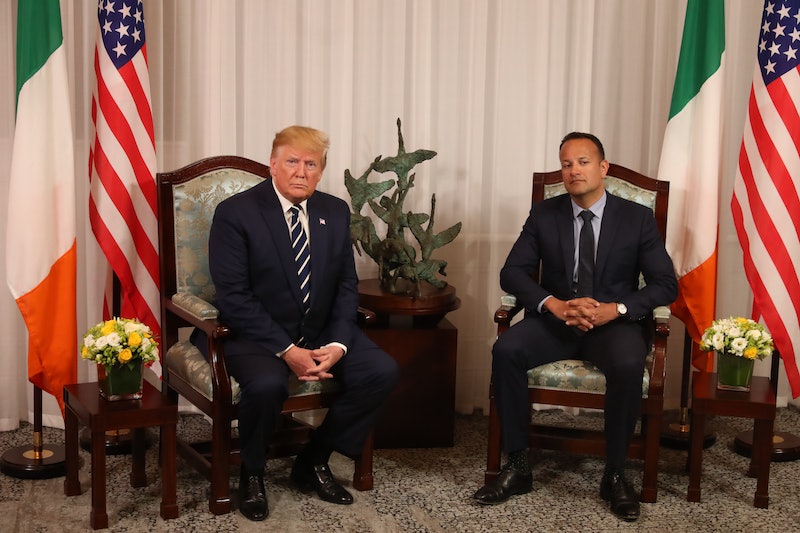 Following the conclusion of his most recent U.K. state visit, President Donald Trump traveled hundreds of miles to Ireland to briefly meet with Irish Prime Minister Leo Varadkar. But where is Trump staying in Ireland? Before flying hundreds of miles yet again to attend D-Day celebrations in France, Trump is staying at his golf course in Doonbeg, Ireland, which, according to The Washington Post, has never turned a profit. But that's not the only reason this particular golf course might ring a bell.

Varadkar declined to meet Trump at his golf course, per The Irish Times, so the two leaders compromised by meeting in the VIP lounge of Ireland's Shannon Airport. Trump then flew to Doonbeg after their meeting, where he is slated to stay until Friday.

Trump's golf course in Doonbeg — which he purchased in 2014 — previously made headlines when the Trump Organization proposed the construction of a sea wall to prevent the Atlantic Ocean from further eroding the course. According to Politico, Trump International Golf Links Ireland filed an application in 2016 to build a sea wall, citing global warming, rising sea levels, and extreme weather as justifications for its construction. As president, however, Trump has pulled the U.S. out of the Paris climate accord and rolled back many climate laws, per the BBC.

In fact, according to Politico, Trump has dismissed climate change as "pseudoscience" and "a total hoax" in the past. As a result, Prince Charles reportedly spent more than an hour trying to convince Trump of the dangerous consequences of climate change during the president's U.K. state visit, per The Guardian.

“He is really into climate change and I think that’s great," Trump told ITV’s Good Morning Britain after their discussion, The Guardian reported. "What he really wants and what he really feels warmly about is the future. He wants to make sure future generations have climate that is good climate, as opposed to a disaster, and I agree.”

Trump disagreed, however, that the U.S. needs to take on a more active role in combating climate change. He argued that other countries like "China, India, Russia" have "not very good air, not very good water, and the sense of pollution," and he insisted that they need to take more responsibility.

“I did say, ‘Well, the United States right now has among the cleanest climates there are based on all statistics,'" Trump said. "And it’s even getting better because I agree with that we want the best water, the cleanest water. It’s crystal clean, has to be crystal clean clear.”

Trump's visit to Doonbeg also drew some controversy after he told reporters that his trip to Ireland was about "great relationships that we have with the U.K." He also compared Ireland's border with his proposed border wall between the U.S. and Mexico, to which Varadkar responded that Ireland hoped to avoid any such border wall. Despite this controversy, however, The Washington Post reported that Trump was well-received in Doonbeg, where his golf course employs more than 200 people.