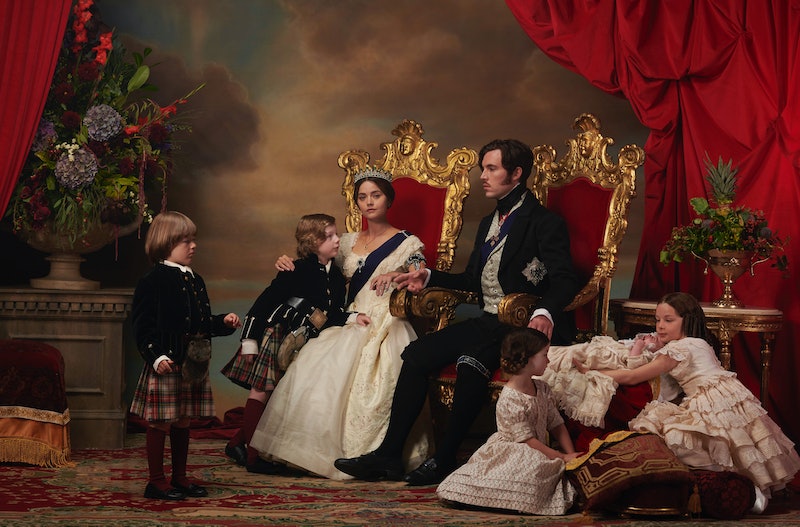 Series three of Victoria, starring Jenna Coleman and Tom Hughes, is right around the corner. The hit TV show's return has been long awaited, and fans can't wait to see how the period drama will continue to unfold. One thing that always amazes me about Victoria is how intricate and distinct the sets are, which has made me wonder: where is Victoria filmed?

Well, according to the Express, Victoria is filmed in various locations around the UK. These include Hull in East Yorkshire (where the main high street was transformed into Victorian England), and Liverpool’s Georgian Quarter. Locations are also said to include Harewood House near Leeds, Carlton Towers in North Yorkshire (which has been a stand-in for Windsor Castle), Wentworth House in Rotherham, The Majestic Hotel in Harrogate, and Beverley Minster in Yorkshire. Phew...

But the main action apparently takes place at Church Fenton Yorkshire Studios, where scenes set inside Buckingham Palace are filmed. Coleman shared a photograph back in 2018 when filming in the location had finished, and included the hashtag '#overandoutyorkshire'.

Visit Britain also shared a long list of locations and buildings where filming has taken place in, from Castle Howard, which appeared as Kensington Palace in the series, to Beverley Minster, which acted as the infamous Westminster Abbey.

All in all, it sounds as though the cast and crew are on the move a lot, and it's pretty go, go, go!

So, what can we expect from the upcoming series of Victoria? Well, the show, which returns on March 24 at 9 p.m., sounds as though it's going to pretty action packed.

“Series three will start in 1848 which was a hugely dramatic and eventful time for both the royal family and Europe, with revolutions on the continent and uncertainty around the monarchy. Viewers can expect more drama than ever before in the third series," creator Daisy Goodwin told the Radio Times.

She went on to share that a lot of the storylines will actually stem from the Queen's own relationship with her husband, Prince Albert:

“Victoria and Albert are the most famous couple of the nineteenth century, but underneath the united facade, their relationship is at breaking point and it is a struggle for mastery that neither side can win.”

Jenna Coleman similarly commented: “Victoria and Albert become more and more disparate and can’t really find their way back to each other… They lose each other for a while.”

Joining the cast this series will be Kate Fleetwood, who will play Victoria's sister Feodora; Laurence Fox, who will be taking on the role of Foreign Secretary Lord Palmerston; Lily Travers as the Duchess of Monmouth; and the actor and comedian John Sessions, who has been cast as Prime Minister John Russell.