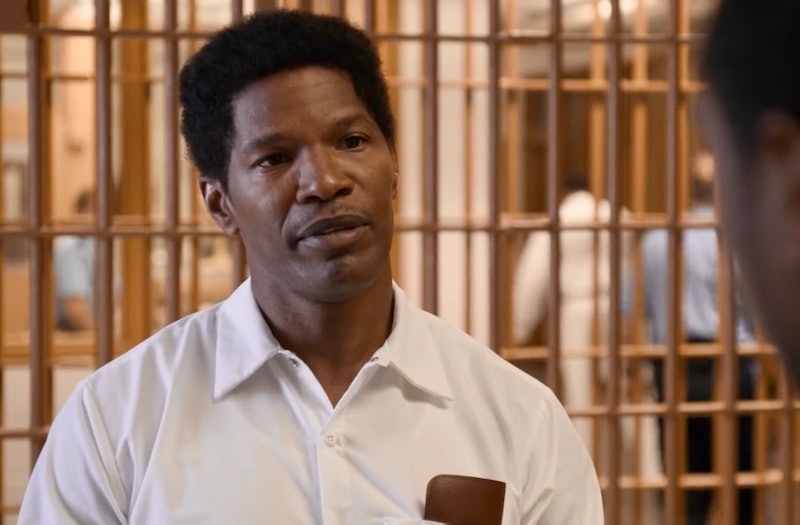 Now that Just Mercy has begun to hit select theaters, moviegoers may be wondering where Walter McMillian is now. The film (out nationwide on Jan. 10) follows the case of the falsely accused former Alabama death row inmate (played by actor Jamie Foxx) whose murder conviction was overturned in 1993. Even after being exonerated, McMillian continued to fight for reform within the U.S. criminal justice system. He died in 2013 at 71 years old amid a battle with dementia.

Police arrested McMillian (known to some friends as "Johnny D"), a black man, in 1987 and charged him with murdering an 18-year-old white woman named Ronda Morrison at a Monroeville, Alabama dry-cleaning shop. McMillian's 1988 murder trial lasted less than two days, and a jury wrongly convicted and sentenced him to life in prison. Judge Robert E. Lee Key exercised a jury override, however, imposing a death penalty sentence, instead.

Just Mercy centers on Equal Justice Initiative attorney Bryan Stevenson (Michael B. Jordan) and his fight for McMillian's 1993 exoneration, following six years on death row for a murder he did not commit. The film is based on Stevenson's 2014 memoir, Just Mercy: A Story of Justice and Redemption.

Following the Alabama Court of Criminal Appeals' 1993 decision, McMillian moved back to his Monroeville hometown. "It's been pretty rough, but then again it's been good, too," he told Alabama's Montgomery Advertiser newspaper in 1997. "It's hard to get it back together. I've had to learn how to live all over again."

Although he suffered a broken neck while on the job as a pulpwood worker in 1995, he told the paper the most difficult challenge of returning to Monroeville was the occasional encounter with Monroe County Sheriff Tom Tate, who was among the officers that sent McMillian to prison.

"He spoke to me like nothing ever happened. It made me sick to my stomach after all the stuff he's done," McMillian added to the Montgomery Advertiser. "But you try to live and keep going. I have to block a lot out because if I didn't, I'd wind up doing the wrong thing. It's in me though, and sometimes it takes all I have in me to hold back. God has helped me out so much. I've just turned a lot over to him."

Following his release, McMillian filed a civil lawsuit against state and local officials, which went all the way to the U.S. Supreme Court. In his federal filing, McMillian, in part, alleged that Tate intimidated a co-defendant into making false statements and suppressed evidence of the co-defendant's inconsistent statements. For his part, Tate didn't comment on the civil case at the time, only telling the Montgomery Advertiser it didn't "bother [him] in the least" to see McMillian around town.

The U.S. Supreme Court ruled against McMillian in 1997, deciding that a county sheriff could not be sued for monetary damages. McMillian reportedly settled with other officials for an undisclosed amount, per the University of Michigan Law School's National Registry of Exonerations. Despite the ruling, McMillian's case became a precursor to Alabama's 2001 compensation statute, which allowed compensation for those who are wrongfully incarcerated.

In 1993, McMillian also spoke to the U.S. Senate Judiciary Committee about the death penalty. "What happened to me could have happened to you, or to anyone else," read his statement. "I was convicted and sentenced to death on the false testimony of one man. I am here today to urge you to do all this is in your power to prevent what happened to me from happening to anyone else."