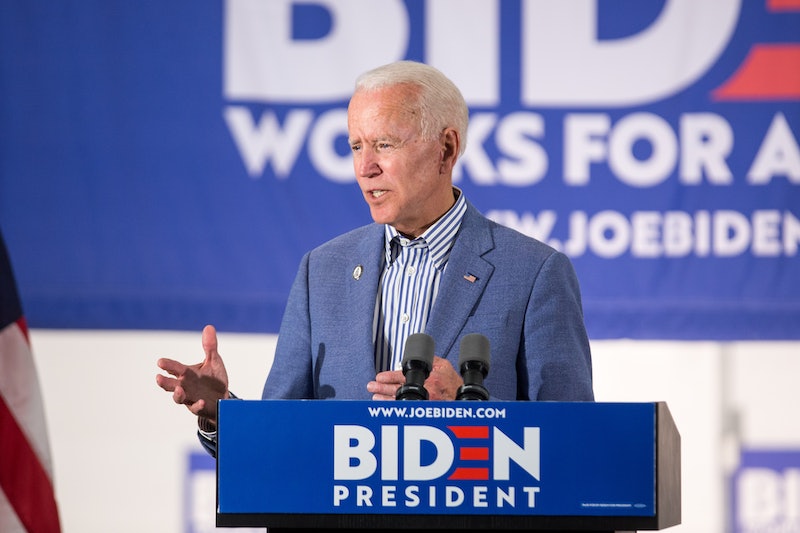 As a litany of states pass strict bans, Democratic presidential candidates are facing a lot of questions about where they stand on protecting abortion access. Among those facing scrutiny is former Vice President Joe Biden, who's history of supporting the Hyde Amendment has become a sticking point for pro-choice supporters. The ban, abortion rights supporters have said, is particularly harmful for low-income women, as well as women of color.

Last month, Biden told an ACLU volunteer that the Hyde Amendment "can’t stay," The Hill reports. But his campaign recently told NBC News that he continues to support Hyde — and will continue to do so until he determines that abortion access as it is protected under Roe v Wade is in peril. Bustle has reached out to the Biden 2020 campaign for comment.

The Hyde Amendment is a national ban which prohibits federal dollars from being spent on providing most abortion care. There are exceptions in cases of rape and incest, or else when the pregnant person's life is in danger, per The Hill. Pro-choice organizations and activists have long lobbies for the rule to be repealed.

"As abortion access is being restricted and pushed out of reach in states around the country, it is unacceptable for a candidate to support policies that further restrict abortion," Kelley Robinson, executive director of the Planned Parenthood Action Fund, said in a statement on Wednesday. "The Democratic Party platform is crystal clear in supporting the right to safe, legal abortion and repealing the Hyde Amendment, a position held by the majority of voters."

"We strongly encourage Joe Biden to speak to the people whose lives are impacted by this discriminatory policy and reevaluate his position," Robinson added.

NARAL president Ilyse Hogue said in a statement that "there’s no political or ideological excuse for Joe Biden’s support for the Hyde Amendment."

Hogue noted that the Democratic party has rallied around a pro-choice agenda "and the basic truth that reproductive freedom is fundamental to the pursuit of equality and economic security in this country." She cautioned the former vice president from "differentiating himself from the field in this way," adding that it "will not earn Joe Biden any political points."

In its report on the matter, NBC News noted that Biden has long had a tenuous relationship with abortion rights. The report notes that Biden has said that abortion conflicts with his Catholicism, although he doesn't have an interest in using his personal religious beliefs to inhibit reproductive rights for others.

This draws a stark contrast between Biden and just about every other headlining Democratic presidential candidate. NBC News notes that all of the women senators currently vying for the party nomination are actively working to peel back the Hyde Amendment, Sens. Kamala Harris, Kirsten Gillibrand, Amy Klobuchar, and Elizabeth Warren.

The Democratic primary debates begin in just a few short weeks, and it's more than likely that reproductive rights will be on the list of topics to discuss. Given how central abortion is in the current political discourse, Biden will almost definitely be asked to clarify his stance in the months to come.