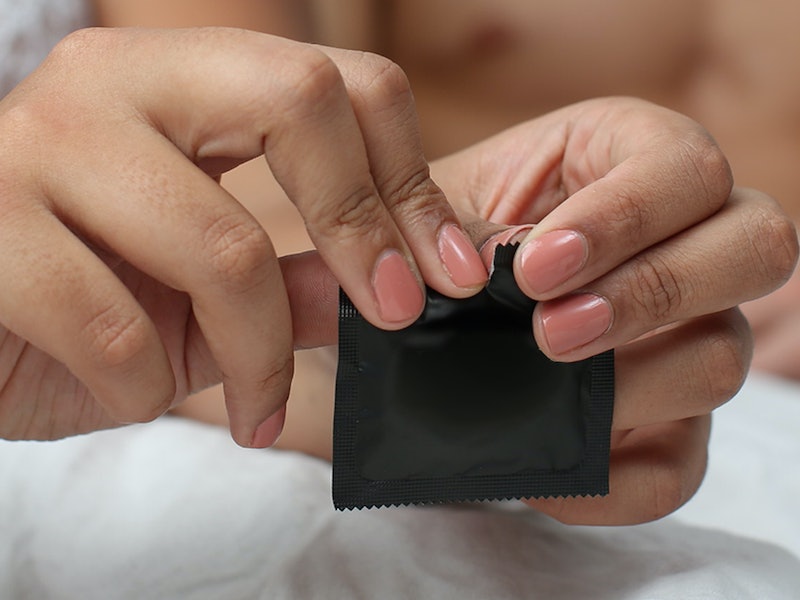 People with uteruses have multiple contraceptive options if they want to take birth control, including the Pill, hormonal and copper intra-uterine devices or IUDs, implants, and injections. People with male bodies, however, have far fewer options, long a source of frustration for partners who can get pregnant. They're basically restricted to either condoms or vasectomies, which block sperm from reaching semen. While a lot of progress has been made on giving people with penises more options, and several promising new techniques are being tested in 2019, experts tell Bustle that there's a long way to go — and many obstacles in the way of successful male contraceptive development.

"There are three general areas of research into male contraception right now," Logan Nickels, director of operations and programs at the Male Contraceptive Initiative, an organization designed to further research into male contraceptive research, tells Bustle. Hormonal contraceptives, he tells Bustle, work to prevent men from producing new sperm in a reversible way, like the Pill. Vas-occlusive devices act a little like a vasectomy. "They prevent sperm from flowing through the vas deferens, but in this case, they don't cut the tube; they instead fill it with a substance that prevents sperm flow similar to a dam."

If somebody decides they'd like the procedure reversed, the flow of sperm can be restored, Nickels says; either they can have a second injection of the device, or the gel itself degrades over time. Non-hormonal drugs, meanwhile, attempt to target sperm itself to prevent it from becoming fertile. "These are drugs that target a very specific step in the long, complicated life of a sperm," Nickels says.

Right now, there are variations on all three types of contraception in development. A forthcoming review of contraceptive research from Dr. John K. Amory, MD, professor of medicine at the University of Washington and a world expert in male contraception, notes that there are a few kinds of hormonal contraception in development. One is long-acting testosterone administered by muscular injections (it's not effective orally, Dr. Amory writes in his review, because it's destroyed by the liver). Another hormonal option is levonorgestrel, which is commonly marketed as Plan B. When combined with testosterone injections, it seems to be a pretty effective way of lowering sperm counts to virtually zero.

Another promising option is Nestorone. It's a gel that combines a progestin that suppresses sperm creation and testosterone, and passed human safety tests in a 28-day trial in early 2019 with minimal side effects. "These two compounds are special in that they not only bind to the androgen receptor, they also bind to the progestin receptor," Dr. Christina Wang, the lead researcher on Nestorone, tells Bustle. "We have completed 28-day studies and they look to be OK, so we are proceeding with a three-month study to see if they suppress sperm, because 28 days isn’t enough to suppress sperm production." Results should be available in 2020. Wang's lab has also produced a transdermal gel that combines testosterone and progestin, and they're currently recruiting couples on four continents to test it. "We want to see whether the daily application of this combined gel will prevent pregnancy in a female partner," Wang tells Bustle, but the results won't be available until 2022.

Vas-occlusive devices may be approved faster than any male contraceptive drugs in the U.S. because of the nature of American regulations around medical devices. "Vas-occlusive devices have the potential to hit the market sooner than any drug-based method, because they're regulated as devices by the FDA, and have a comparatively shorter approval pathway," Nickels tells Bustle. Dr. Amory's research reports that several vas-occlusive devices have been tested. One, known as "reversible inhibition of sperm under guidance" or RISUG, has been tested in small trials and shown to be effective and reversible, but large-scale trials haven't been finished yet. Another vas-occlusive method called Vasalgel has been tested, but research showed it might have long-term effects on male fertility, so it may not be as reversible as desired.

The most promising non-hormonal options being tested right now, according to Dr. Amory, include a product that immunizes men against EPPIN (Epididymal Peptidase Inhibitor), a sperm surface protein, making their sperm degrade, and a genetic method for "knocking out" a protein that helps sperm move effectively. However, a lot of work remains to be done to produce a non-hormonal male contraceptive that works with minimal side effects.

Getting a male contraceptive developed, however, faces a lot of hurdles. "We are fighting physiology — a male makes 1,000 sperm a second," Dr. Amory tells Bustle. There's also a difficulty with side effects. "Tolerance for side effects is very, very low," Dr. Amory says; testing of a promising hormonal contraceptive was discontinued in 2016 because of concerns about side effects, including adverse mood effects. Many of these side effects were identical to those experienced by users of the contraceptive Pill and other hormonal birth control methods.

"Any drug that gets developed will have to be very safe, and very effective — and since a male contraceptive hasn't been approved before to set precedent, it's somewhat unclear what bar a drug will have to meet," Nickels tells Bustle. "On top of that, developers are always fighting the misperception that men won't use male contraceptives - even when data shows that they will." One of the biggest issues, he says, is funding; getting a drug to market can cost over a billion dollars, according to the Tufts Center for the Study of Drug Development, and without interest from pharmaceutical companies, it's difficult to set up comprehensive research or human trials. Dr. Wang tells Bustle that her trials are some of the lucky ones, as they're funded by the U.S. government.

The future of male contraceptives looks bright — as long as public interest, pharmaceutical money and government funding maintain their momentum. One day soon, people might be able to enjoy more reproductive options to fit their needs, but there's still a long way to go.

Dr. Christina Chung-Lun Wang, Professor of Medicine, David Geffen School of Medicine at UCLA, and investigator at The Lundqist Institute

Logan Nickels, director of operations and programs at the Male Contraceptive Initiative

More like this
How Getting An Abortion Has Changed From The ’60s Through Today
By Amanda Chatel
13 Ideas To Add To Your Sex Bucket List
By Kristin Magaldi
6 Abortion Advocates To Follow On TikTok
By Sara Youngblood Gregory
The UK Abortion Laws In 2022, Explained
By Sophie McEvoy
Get Even More From Bustle — Sign Up For The Newsletter