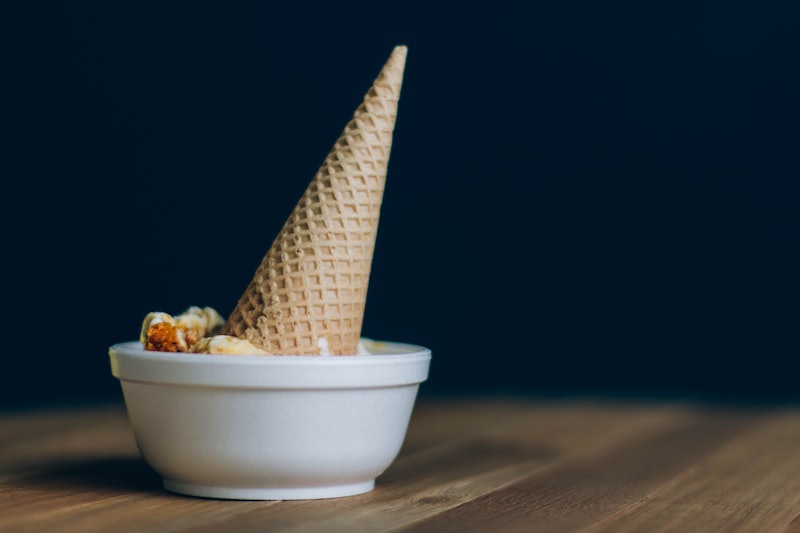 Whether your heart has just been broken or it's just been a long week at work, alcohol and ice cream are the perfect pairing for any occasion. You may usually reach for wine to go with the dessert, but that's only because you don't know yet where to get Arctic Buzz, the vodka-infused line of ice cream with an alcohol content that might actually get you buzzed. Luckily for you, that's why I'm here — to tell you how you can get your hands on a food that combines all that is good in the world, i.e., booze and chilled dairy desserts.

Apparently, the people at Arctic Buzz spent quite a bit of time trying to figure out how to add vodka to a frozen dessert. "If you have ever put a bottle of vodka in the freezer, you know the vodka wins every time," notes the company's website wryly. (That's because ethanol has a much lower freezing point than water, and most household freezers aren't cold enough to reach that temperature. The more you know!) After some tweaks and many, many tastings, though, Arctic Buzz was born. Presumably, its creation was heralded by a choir of angels, but I can't say for certain.

Currently, the company offers six flavors: cookies and cream, key lime pie, raspberry, coconut, chocolate, and good old vanilla. According to the Arctic Buzz website, the Baltimore-based company partnered with local distilleries to create artisan vodka flavors unique to each product. Chocolate vodka goes in chocolate ice cream, raspberry vodka can be found in the raspberry ice cream, and so on. They even created a cookies and cream vodka for the eponymous ice cream flavor.

Alcohol-infused desserts are nothing new. A quick browse through Pinterest turns up plenty of liquor-flavored recipes for cupcakes, pies, and brownies. The catch is that most of the alcohol tends to evaporate during cooking, so you're not likely to get buzzed on bananas foster.

Products like Arctic Buzz, though, actually contain alcohol, and as far as boozy ice creams go, it doesn't kid around. The alcohol by volume (ABV) varies from flavor to flavor, but it hovers around 8.7 percent. To put that in perspective, the average ABV for beer is about five percent, and wine is around 11 percent. (Meanwhile, as Cosmopolitan pointed out, the Haagen-Dazs line of alcohol-infused ice creams is less than one percent — not exactly strong stuff.)

So where do you get your hands on this glorious concoction? Tragically, Arctic Buzz only appears to be available in its home state of Maryland at the moment, so if you live elsewhere, you'll have to travel for the ice cream. (No judgment if that's exactly what you plan on doing.) The good news is that if you find yourself in Maryland, it's sold in dozens of liquor stores and bars in the area. The company lists all its vendors on this page of the website.

Vodka haters can still get their alcoholic dessert on, although they'll have to look elsewhere. "Adult" ice cream has become something of a trend over the last few years, with shops like the Tipsy Scoop opening their doors to the booze-and-dairy-craving public. Mercer's Dairy has sold wine-infused ice cream for more than a decade, with flavors ranging from Peach White Zinfandel to Chocolate Cabernet, and it skyrocketed in popularity once the Internet discovered its existence. The company is based in upstate New York, but it has some national distribution. There's also the line of tequila-infused gummy bears, which contained real alcohol, released by Sugarfina this summer.

Basically, it's easier than ever to have your cake — er, ice cream — and drink it, too. What a time to be alive!