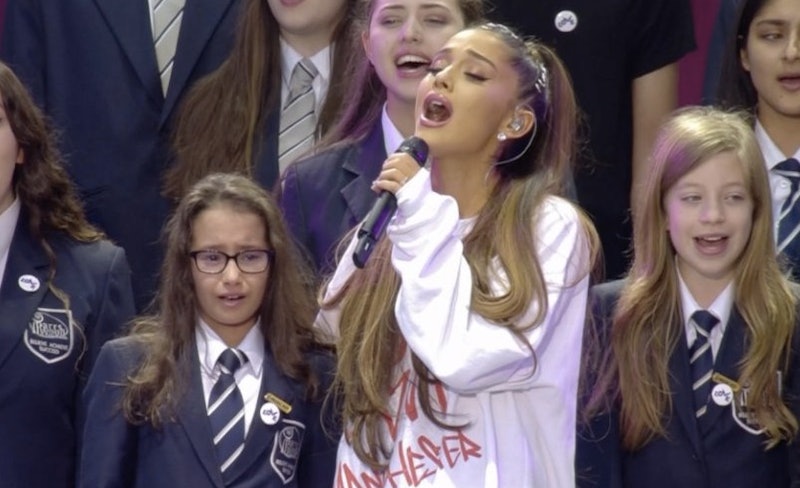 On June 4, Ariana Grande performed a special concert to stand in solidarity and raise donations for the victims of the Manchester Arena bombing, which claimed the lives of 22 people during Grande's Dangerous Woman tour show. During the benefit performance, Grande wore a particularly special sweatshirt, and it's available to the public. So, where can you buy Ariana Grande's One Love Manchester sweatshirt?

Grande stepped onstage wearing a "One Love Manchester" crew neck hoodie that was white with light pink lettering, and if you want to pitch in and donate to those affected by last week's terrorist attack, it can be yours. It's currently sold online at UK's One Love Manchester Shop, which has a collection of similar T-shirts, crew necks, long sleeves, and baseball caps. In the online store you shop to donate, meaning that the net proceeds of all sales will be donated to the British Red Cross Society's "We Love Manchester Emergency Fund," which directly supports the victims affected by the attack. If you would like more information on the specifics of the fund, you can learn more at Redcross.org (as well as text to donate five pounds directly into the fund if you can't budget for merchandise at the moment.)

The crew neck hoodie comes in sizes between Small and XXLarge and comes only in white. It retails for £40, which is around $51.50. It's expected to ship between two to three weeks, which is standard for international shipping.

Grande stepped onto stage wearing it to perform her first two songs for the concert, "Be Alright" followed by "Break Free," asking the crowd to join in and sing with her and leaving everyone emotional. The Manchester bombing was tragic, and small ways to give back like this can make a huge difference.