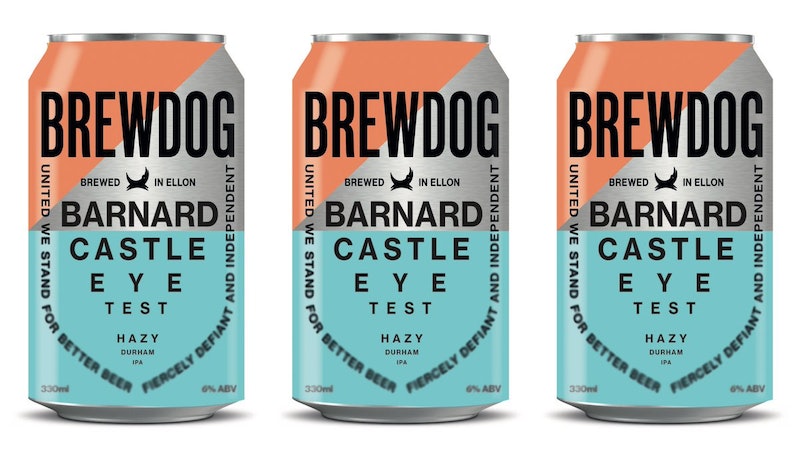 If British lockdown were a game of bingo, anyone with Zoom quizzes, banana bread, novelty alcohol, and OMG WTF political moments would have a winning card in their hands. And now the latter pair on out list have been married to created one of the funniest (and most enjoyable) creations to come out of this whole mess. Yes, Brewdog is selling Barnard Castle Eye Test beer and whether you love or hate the brand, this is so on point.

The beer is described by the company as a, "short sighted beer for tall stories." It's a New England, old-school IPA and, at six percent, is best enjoyed slowly. It's dry hopped and said to have notes of mango, pineapple, and lime. Perfect to enjoy after a nice long summer drive. It costs £16.95 for a 12 pack and all of the profits will go to funding the manufacture of hand sanitiser for the NHS and Health Care Charities.

The name of Brewdog's new tipple is of course a reference to the recent scandal involving Dominic Cummings, Prime Minister Boris Johnson's senior advisor. Cummings is best known as the mastermind behind not only the Vote Leave campaign but the landslide win by the Conservative government in the last UK election. He's credited with creating three-word slogans such as "Get Brexit Done" and "Take Back Control." Sadly, a more recent decision to "Drive To Durham" in an apparent flouting of lockdown rules has garnered a lot of disapproval from the general public and MPs on both sides of the fence.

Barnard Castle Eye Test
Brewdog
A yummy IPA to break out in the sunshine.

Brewdog take on this whole debacle is pretty funny but, let's be real, the beer maestros haven't been exactly devoid of controversy themselves over the years. Barnard Castle Eye Test isn't the company's first foray into satire, but let's hope this one is more successful than their 2018 limited-edition Pink IPA, which was supposed to be in support of "causes that fight against gender inequality." Let's just say that the marketing around the Pink IPA (dubbed by Brewdog as "beer for girls") missed the mark for many consumers.

The company also came under fire more recently when it began manufacturing hand sanitiser, with people accusing them of trying to capitalise on the pandemic. As a result, Brewdog's head honcho James Watt had to step in, clarifying: "Just to be clear, we will not be selling the sanitiser. But giving it away to those who need it."

More like this
Pret & Costa’s Coffee Is The Strongest On The High Street, According To Which?
By Sam Ramsden
Ben & Jerry’s New Sundae Flavours Are A Chocoholic’s Dream
By Sophie McEvoy
Matt Hancock’s TikTok Is The Most Matt Hancock Thing Ever
By Sam Ramsden
Forestcore Is About To Take Over Your TikTok FYP
By Sam Ramsden
Get The Very Best Of Bustle/UK
Sign up for Bustle UK's twice-weekly newsletter, featuring the latest must-watch TV, moving personal stories, and expert advice on the hottest viral buys.