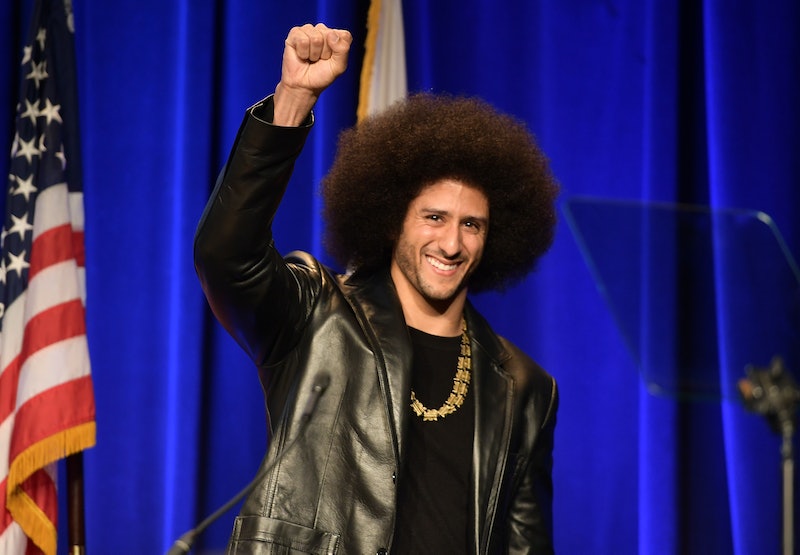 Sports fans across the country may be excited about watching the ultimate showdown of the year for football, but some have taken a stance against the sport and NFL altogether. Celebrities spent their Super Bowl Sunday wearing Colin Kaepernik's jersey, supporting the former quarterback for his stance against social injustice and racism against people of color.

Many celebrities came out to support Kaepernik's decision to step away from the NFL once the controversy around his protest to kneel during the National Anthem became the center of morning table talk. During this year's Super Bowl, some of the same celebrities who stood in solidarity with Kaepernik when he first left his post as quarterback are sharing there continuous love and support.

Stars from all parts of entertainment took to Twitter and Instagram to share their "I'm with Kap" hasgtags. From rappers like Common to fashion icons like Zendaya all posted pictures of themselves either posing in the Nike x Kaepernik jersey to show love or retweeted past tweets to bring the moment full circle.

Zendaya quote tweeted herself from 2017 to show that she still was rocking with the former 49ers quarterback. When celebrities share their consistency on who they support, it's something to be admired.

Nick Cannon also took to Twitter to show his support, promoting a challenge for people to donate $7 to the Your Rights Campaign. After paying it forward, you can challenge someone else to do the same on the organization's website. That's one smart way to say you'll put your money where your mouth is.

Kaepernik himself even posted to Twitter about his appreciation for his own trending hashtag, but especially by John Carlos, who also wore the iconic #ImWithKap tee with the activists old number patched on the front. Clearly, Carlos is a hero to Kap.

A Wrinkle in Time director Ava DuVernay posted a video to Twitter about her out beliefs against the NFL's treatment of its players as a health matter and as a matter of race. The creator and activist is one of many who stood up this year's Super Bowl to stay on the sidelines.

Common even posed with legendary civil rights activist Dr. Angela Davis, who wore the #ImWithKap shirt to show their support. The rap star posted the photo on Twitter captioning it with on of the activists most iconic quotes: "I’m no longer accepting the things I cannot change. I’m changing the things I cannot accept.”

This year's Super Bowl had stirred up a lot of controversy as far as the views of the NFL is concerned. There's still a lot of change that needs to be had, but when celebrities, activists, and influencers of the highest degree come together to make a bigger problem known, there's a bigger opportunity for more voices to be heard.