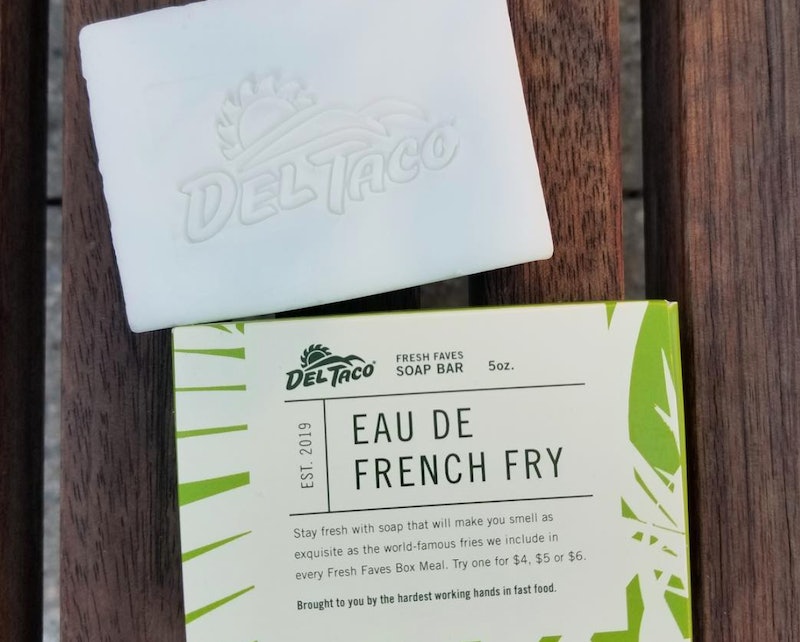 Thanks to the wonders of modern cosmetic science, you have your choice of soaps to get you clean and that smell really good. From fruity florals to warm vanillas to citrusy linens, there's no shortage of soap scents to stimulate your nose. Then there's Del Taco's Eau De French Fry, which is french fry-scented soap. Yes, really.

The fast food chain, which largely operates on the West Coast, issued the savory soap earlier this week. It was created to smell exactly like the restaurant's signature crinkle cut fries and was initially used to promote the new Del Taco Fresh Fave Box Meals, which feature the aforementioned spuds. Yesterday, the soap was made available for $3.95 on Del Taco's webstore, which also sells a treasure trove of branded merch, including socks, hoodies, beanies, and more.

It quickly sold out because of course it did. A soap that smells like delicious, salty, and fried potatoes is the bath time anomaly you never knew you wanted or needed. Until now.

There's no need to get worked up into a lather over the sellout. Bustle reached out to Del Taco reps to inquire about future availability. They confirmed via email that the soap will indeed restock via the webstore on March 14 at 1 p.m. ET/10 a.m. PT.

Despite the unique scent, the bar itself is pretty unassuming. It's white, with the Del Taco logo stamped on the top. It comes packaged in a simple, green and white box detailing the Fresh Faves promotion. The packaging isn't obvious and doesn't boast any potato graphics. The only reason you know it smells like fries is because its name says so.

If you are one of Del Taco's faithful, there's another excellent way to express your love for the chain through fashion. You can get decked out in Del Taco gear. You can create an entire Del Taco OOTD by shopping the company's webstore. Or you can add dose o' Del to your ensemble with one piece of merch.

Below are some of the key basics you can buy.

A black zip-up hoodie is a wardrobe staple. But this one gets a boost from the Del Taco logo on the front panel. It comes in sizes S-3X.

The gray knit beanie is less than $10. It's an all-season hat and proudly displays the Del Taco logo on the front.

This brown tee will look like a vintage piece unearthed at the local thrift store. But it's brand new and just $19.99. It comes in sizes S-XL.

While you might not always associate your favorite fast food chain with your footwear, these Del Taco socks bridge that gab.

Who needs that ratty ol' Von Dutch hat stuffed in the back of the closet when you can have this retro Del Taco cap? The adjustable back hat looks like it came from the '70s and adds instant cool to your OOTD.

Who knew there were so many ways to incorporate your love of Del Taco into your life? Good luck shopping soap restock. You'll be able to transform your daily shower routine into a spa ritual scented with the aroma of fries.