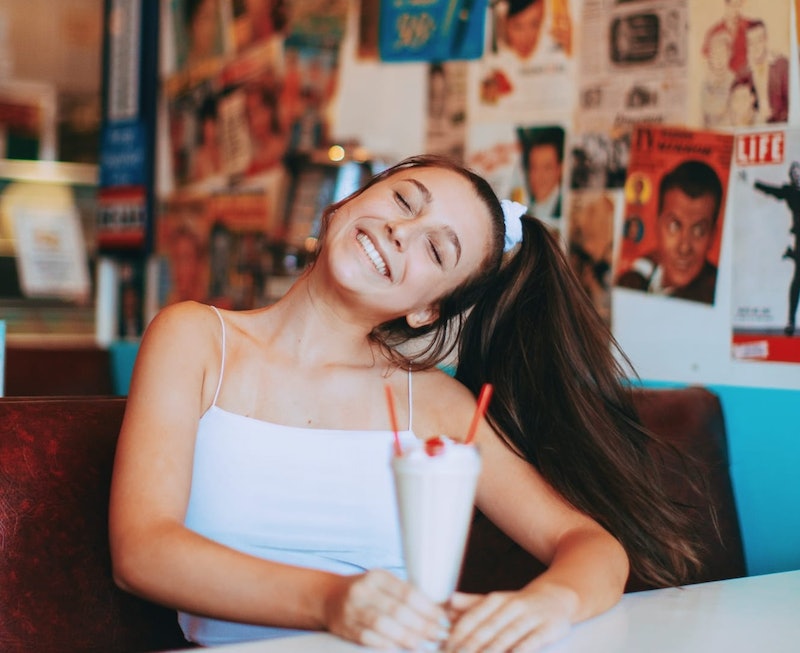 It's no secret that the '90s are in — just take a look outside and just about everyone is wearing fanny packs, bucket hats, and tiny sunglasses that were in their peak during that era. But scrunchies are making just as big of a comeback, as evidenced by Emma Chamberlain's grandma scrunchie selling out in just 29 minutes.

Chamberlain is a 17-year-old YouTube star, with 3.3 million Instagram followers and 3.6 million YouTube subscribers. She is a lifestyle vlogger with a self-titled YouTube channel that she started in 2017, and she posts everything from lookbooks, to DIYs, to hauls, to recipes. She has a massive following which she accumulated in no time at all, which means her viewers love her and trust her fashion sense. So it comes as no surprise that her new accessory and clothing line drop sold out almost as fast as Kylie Lip Kits.

The Gen Z YouTuber has been teasing her upcoming line called "High Key by Emma Chamberlain" on her social media accounts, but has been blurring out the accessories to increase the hype over the collection drop. Piquing everyone's interest, she put the products up on pre-sale on Dote, a mobile shopping app, a month before High Key's official launch. The soft-launch was called "Low Key," but there was a catch when it came to the pre-orders: All the images were blurred, just like in the social media teasers, and had scrambled descriptions. So you didn't really know what you were buying, but you had a vague idea.

Since the accessory was blurred out on top of Chamberlain's high ponytail, it was easy to piece together that it was a scrunchie, and according to a representative from Dote who spoke to Allure, the teal floral-printed scrunchie sold out in exactly 29 minutes. Dubbed the Grandma Scrunchie, it cost and affordable $6.50, and flew off the shelves. The rest of the products in the collection sold out in two hours.

If you're itching for your own velvet scrunchie to add flair to your top knot or high pony, then never fear. High Key officially launches today, and with it all the products are restocked on Dote. In order to shop it, you will have to download the app and purchase it through your phone, so it's not as simple as pulling up a web browser.

The floral printed scrunchie isn't the only one offered up with the launch — in fact, there are four different styles you can shop. The entire collection includes strappy tanks, a teddy bear brown jacket, a yellow denim jacket, and the now iconic scrunchie collection.

As for the inspiration of the name, Chamberlain told Business Wire, “My approach to fashion inspired the name — wearing unique clothes that I love, dressing without fear and, of course, it gives nod to my unfiltered ways." If that seems close to your own wardrobe mantra, then this '90s inspired collection has your name all over it. All you have to do is shop it before it sells out.