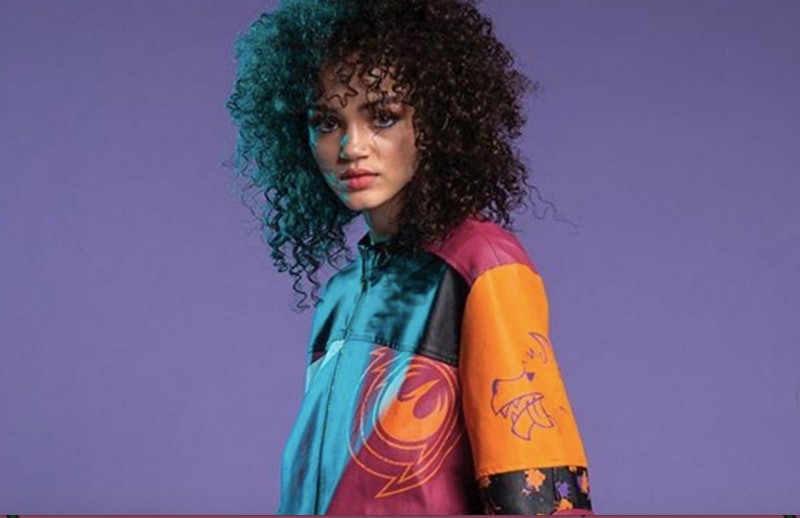 Star Wars is a franchise that has shown women from all walks of life kicking butt on screen since the '70s. Honoring the women who love the sci-fi franchise, Her Universe is launching its Star Wars Sisters Of The Force capsule collection (offers sizes XS-5X for women and unisex sizes XS-3X). May the force be with shoppers (and their wallets0 as they peep a super demure cape, an army jacket, and other signature Star Wars-inspired pieces in this collection.

Her Universe started in 2010 as a fashion and lifestyle brand for women in sci-fi and cosplayers. The brand’s founder Ashley Eckstein is also an actor and plays the voice of Ahsoka Tano on Star Wars: The Clone Wars and Star Wars Rebels. Eckstein explained in an interview with StarWars.com that the new Sisters Of The Force collection was designed with the women of Star Wars in mind.

Fans will find ombre dresses, super cool jackets, and graphic tees in this collection priced from $39 to $110. While the collection will officially debut at the Her Universe booth at the Chicago Star Wars Celebration, it will be available on HerUniverse.com beginning April 11.

Here’s everything Star Wars fans can expect in the collection.

There are two pieces in this collection that are inspired by of Padmé’s lake retreat dress in Star Wars: Episode II – Attack of the Clones. The first piece is this ready-to-wear version of the dress that Natalie Portman first donned in the film. The original gown in the movie was longer with more drama, but this wearable chiffon version is perfect for the spring.

Where there are fans who enjoy the flow of a skirt, there are fans who want to rep Star Wars more casually. Enter Padmé’s lake retreat hoodie. Featuring the same bright pastels in the original dress and its Her Universe sister gown, it's one piece that's equal parts cute and comfortable.

Ahsoka Tano is a character and war hero in Star Wars: The Clone Wars. This windbreaker is inspired by the same print tank rocks in the headpiece the character wears on the show.

Although this cape isn't a direct pull from Princess Leia's iconic coat in the original Star Wars saga, it's a dope look for cosplayers. The cape coat is made of a textured jacquard fabric with a metal nameplate on the front.

Rose Tico is a crew member supporting the starfighters in the 2017 film Star Wars: The Last Jedi. In the film, she's seen wearing a mustard utility jumpsuit and Her Universe reimagines it in this edgy army jacket.

Fans of Star Wars Rebels know Sabine Wren as a knowledgable explosives expert and tagging with spray paint. This colorful jacket captures Sabines love for graffiti in all pleather.

The Star Wars franchise has created a space for women in sci-fi to relate to. Now, fans can even pull the looks of the most badass women in the Star Wars universe straight from the rack.

More like this
Mrs. Wheeler Wore A Vagina Necklace In 'Stranger Things' Season 4
By Allie Fasanella
Tess Holliday Wants The Metaverse To Be A Safe Space For Plus-Size People
By Dominique Norman
Dan Levy Gave Loungewear New Meaning In His Hilarious IG Runway Show
By Brad Witter
On The Enduring Allure & Power Of Princess Diana’s Uniform
By Eloise Moran
Get Even More From Bustle — Sign Up For The Newsletter