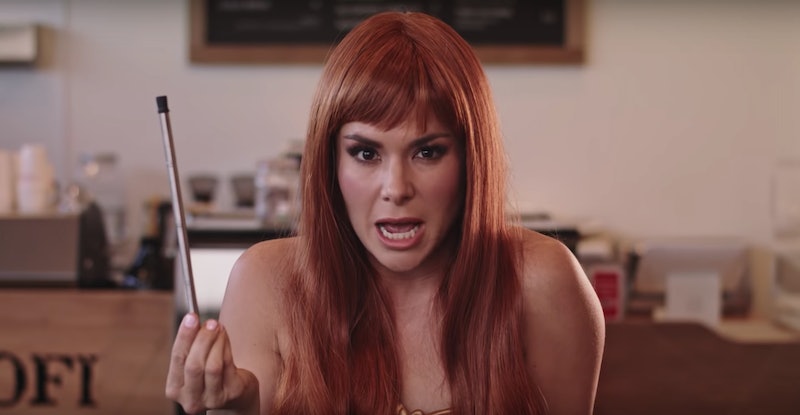 You've probably seen a video of it floating around the internet — the reusable, stainless steel straw that folds into a compact carrying case, also known as the Final Straw. After the product went viral last spring, plenty of other retailers have begun selling similar versions of the design at half the price. So, if you're looking for where to buy the final straw, you'll have to tread carefully to track down the real deal.

The product first made headlines in April after raising $1.8 million on Kickstarter, and receiving pre-orders for 86,000 straws by the end of its campaign, Buzzfeed reports. According to the company's official website, their goal is to reduce plastic waste and "make the public more aware of the devastating effects of plastic pollution." But because of the sudden wave of copycats, they may have inadvertently done the opposite.

If you type "Final Straw" into Google, you'll be met with a slew of similar looking results. Beware, though, because they're not consistent. Different renditions of "finalstraw.com" exist on the front page of search results, as well as Amazon listings for dozens of reusable straws with what looks like the same design, or at least a version of it. "How is this possible?" you might ask. Well, according to Mic, the Final Straw patent is currently pending, which keeps its creators from being able to take legal action for now. In the meantime, you, the customer, will have to take some extra precautions to ensure you're purchasing from the right seller.

You can pre-order the official Final Straw at finalstraw.com — not finalstrawshop.com or finalstrawonlinestore.com. Those are a couple of the many websites selling similar products. Notice the term pre-order — the official final straws aren't expected to be out for delivery until November, so if you've already received one, it's likely that yours isn't the same one everyone's been buzzing about.

For Emma Cohen, who co-created the straw with cinematographer Miles Pepper, it's easy to spot the duplicates. "They are hard to miss. It’s my face. I am advertising [them]," she told Buzzfeed news. And for those that do accidentally purchase the wrong kind, their mistake will become clear soon enough: Pepper claimed to Buzzfeed that he bought two of the faux Final Straws on Amazon and they didn't hold up.

“The types of people who take advantage of the gaps in Amazon systems would find this as an opportunity and take advantage of it,” Chris McCabe, who used to work on the seller performance evaluation and policy enforcement team at Amazon, said in the same BuzzFeed report. "Some Kickstarter campaigns are particularly attractive to scammers. For these listing creators, this is a golden opportunity because there’s not an actual seller to compete with — until November, at least.”

The Final Straw team continues to report the duplicate listings and has seen success in getting many of them removed from Amazon. But dozens of others exist on marketplaces like eBay and Alibaba. And when customers end up with a product they're not happy with and immediately toss it aside, it makes the waste-reduction mission of Final Straw pretty counterproductive. That's why it's important to do your homework and make sure you're placing your order with the right people — so you can drink that Frappuccino responsibly.