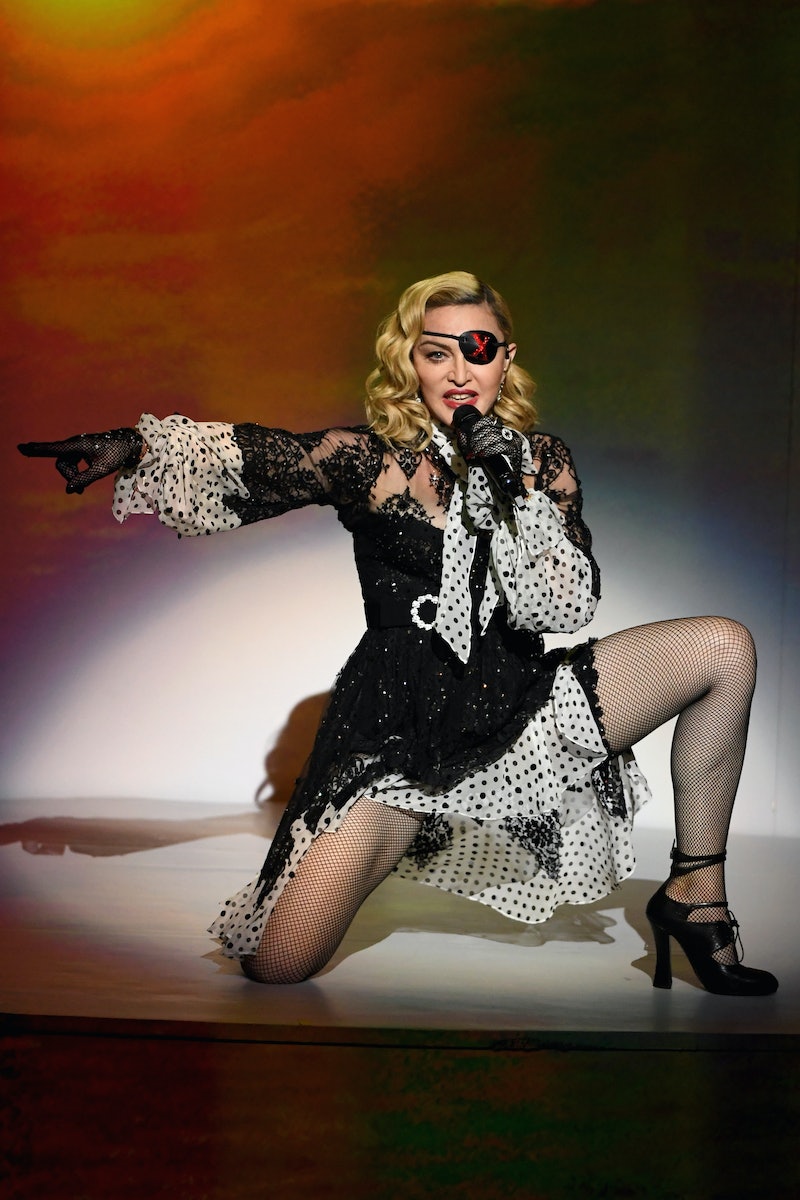 It's a match made in makeup heaven. Madonna and Too Faced created a makeup collection — but there's a catch. The collection is comprised of two super exclusive kits that will only be available at a specific location, as revealed by Too Faced co-founder and chief creative officer Jerrod Blandino and Madonna on their individual Instagram feeds on Sept. 12.

The collaboration is inspired by looks that Madonna will actually be wearing on her upcoming tour in support of her latest album Madame X. The Madonna x Too Faced makeup kits will be sold at each tour date.

However, the collection is also temporarily available at the NYC Madame X pop-up shop from Sept. 13 through Sept. 19. The pop-up is located at 430 West 15 Street in Manhattan.

Blandino emphasized in the caption of his post that the kits are extremely limited. However, the brand could eventually sell the sets on its website at a later date if the demand is high.

Blandino also shared his signature "sneaky peek" of the products in a series of Instagram stories that he filmed while perusing the pop-up. He posted a picture of the price listing from the mobile store, which shows that the makeup collection costs $75. Overall, these products just might inspire fans to hurry up and nab tickets to the tour.

Here is all of the intel on the makeup collection, based entirely on Blandino's big reveal. Each kit can be used on its own or together. Together, they equal a full face kit minus foundation and concealer.

The I Rise kit, which takes it name from a Madame X song, features a wallet-sized palette with exclusive eyeshadow and blush shades. It also boasts a brow pencil, the best-selling Better Than Sex mascara, and the Melted Matte lipstick in the Sell Out shade. The eye and cheek shades are named after Madonna's biggest hits, like "Material Girl" and "Dress You Up." The packaging features Madonna rocking a beret and golden curls.

The Medellin collection also shares its name with a Madame X track and boasts a palette with five shades of eyeshadow and a blush — all of which are also named after Madge's mega hits, such as "Ray of Light" and "Like a Virgin." It includes the brand's semi-new Damn Girl! mascara, a Better Than Sex liquid eyeliner for perfecting those cat eye flicks, and a Melted Matte lippie in a burnt red shade. The pop legend and fashion icon has statement lips on the packaging.

The pop-up shop includes additional merch, such as patches, lapel pins, arm bands, fanny packs, pendant necklaces, scarves, hats, and shirts. It's a fully immersive Madonna experience. The merch will likely be sold at the tour dates alongside the Too Faced makeup. Bustle reached out to Madonna's reps for more information.

UPDATE: Madonna reps confirmed this merch drop is exclusive to the pop-up.

If you have already bought tickets to Madonna's tour, which begins with a unique residency in Brooklyn this month, you now have two more reasons to pop over to the merch booths before heading to your seats. These Madonna x Too Faced makeup kits offer you the tools to to replicate the singer's signature style. They will also inspire you to get creative when drafting up your own unique looks.