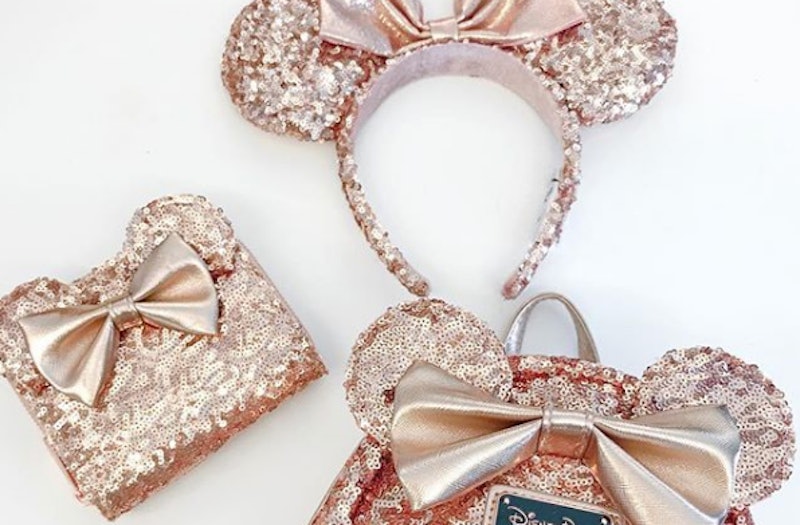 Disney will never go out of style, but apparently it can get even more stylish. According to the Instagram announcement, there is now a sequin millennial pink Minnie Mouse bag and wallet to go with those ears of yours. There's pretty much nothing that's immune from this rose-gold trend. Get your plane tickets ready, because there's only one way to get your hands on these accessories.

While there are ton of designers that nail the Disney trend, none do it better than Disney itself. After the millennial pink ears took over the parks in the best possible way, Disney decided to give it a few friends for company. The book bag and matching wallet is covered in millennial pink sequins and complete with a silky bow and ears of its own.

Now, before you go grabbing your wallet and searching the web, there's one thing you should know. You can only buy the millennial pink book bag and wallet at Disneyland and Walt Disney World.

Just like the Instagram-worthy ears, you won't be able to buy this bag anywhere else. It gets an even more special meaning knowing that it's so exclusive, but there will be plenty of millennials with crushed dreams for sure.

According to Instagram users, this bag is a whole lot smaller than it is in the photo. Instead of being a full-sized bag, it's a mini. You know, just enough to hold your wallet, camera, and passes. The wallet seems to be full-sized, although there's no product description to go off of.

Lounge Flip, the creator of the bag, does have a website, but this trendy duo is not listed online. Because there's no website to browse on, it's unclear exactly how much the price of these items are. According to Instagram users, this mini back pack rings in right around $80. While that might seem like a lot, it's a small price to pay for nostalgia. There's no word on how much the wallet costs.

Park goers have one more update for fans of the bag. Apparently, the bag is sold out at almost every single park store. One user says that five stores were sold out, while another says that you can see people carrying them all around the park. Basically, it's just as trendy as it looks on Instagram. Before you go planning your trip to get one, you should wait for a restock.

While there isn't officially another lace to shop the bag, that doesn't mean that it's off limits to everyone outside the park. People haven't taken this purchase beyond the magic kingdom and onto online selling websites. There are two different bags available on Mecari, a Japan, United Kingdom, and United States based selling app.

One of the bags is selling for $130, while the other is up for grabs for $150. That's a cool $50 to $80 more than the already high price tag. There's no listing for the wallets on the website though.

You might not want to visit the park to see your favorite oversized characters, but Disney sure knows how to attract millennials to its doors. If this isn't enough to want to plan your next trip to the park, then I don't know what will be.