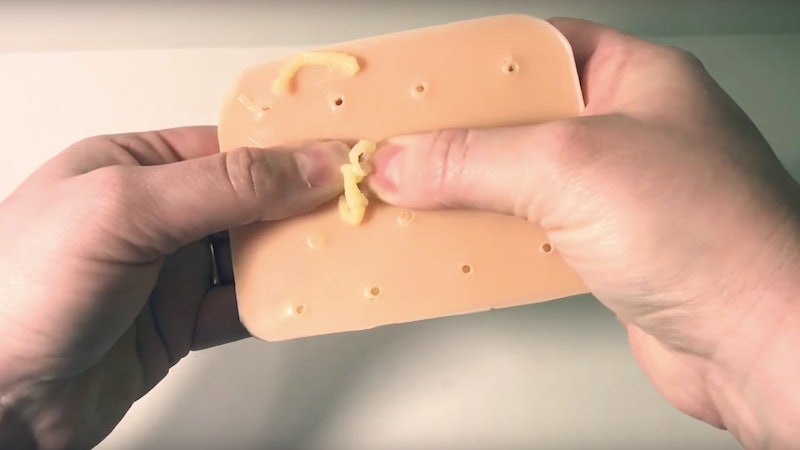 If you're familiar with Instagram, chances are you've seen the work of (or at least heard the name) Dr. Sandra Lee, aka Dr. Pimple Popper. The California dermatologist has attracted 2.6 million followers on the platform with her movie-like clips of blackhead extractions, cyst excisions, and an array of other grossly captivating skin procedures. It's difficult for many people enthralled by her work to follow the disclaimer that opens each video advising against performing such acts on oneself. With this in mind, it makes sense pimple poppers everywhere are clamoring to find out where to buy the pimple-popping toy that went viral this week and has had the internet entranced ever since.

The toy in question is called the Pop-It Pal, which is effectively a slab of porous plastic that simulates skin. Available exclusively on the company's website in both peach and brown, each Pop-It Pal retails for $19.99, and comes equipped with fifteen "pores" for maximum poppage. The best part? The Pop-It Pal is refillable, with extra bottles of fake pus available for purchase for $5.99. So, there's no limit to how much popping you can do!

The delightfully disgusting toy is the brainchild of entrepreneurs Billy and Summer Pierce, a married couple based in the U.S. On the "About" section of their website, they explain that the idea for such an invention came while driving down the road. Summer, an unabashed lover of the habit, suggested how cool it would be to create a lifelike, poppable pimple like those in the viral videos — but one that allows you to avoid picking at your skin to experience the unique relief only popping can provide. After a year of development, the contraption was born.

If you haven't been bitten by the pimple-popping bug, chances are none of this really makes sense to you. It's likely confusing as to why there's a market for a slab of fake pimply skin. Though undoubtedly unconventional, the development of the Pop-It pal may actually do an enormous favor to those with a tendency to pick at those pimples.

While one risk of popping is the development of permanent scars on the skin, a bigger issue at hand is infection risk. According to Dr. Zakiya Rice of the Emory University School of Medicine, a frequently overlooked effect of popping your own pimples is the risk of introducing more harmful bacteria into the skin after opening the pore. When professionals like Dr. Pimple Popper do it, they're in a sterile environment, using disinfected professional tools. Unless you have a hospital-grade autoclave in your bathroom, you're not doing the job safely.

The Pop-It Pal removes this risk entirely, something that could be a saving grace for those with the tendency to pick at their skin.

The whole pimple popping internet phenomenon has only become risen to prominence in the last few years. When Dr.Lee began posting videos of her work on Instagram and YouTube in 2015, nobody could have predicted the explosive (hehe) response. On her official website, Dr. Lee says she thinks the reason people enjoy watching her videos so much is because “There’s a great sense of satisfaction to watch pressure being built up and released, and to watch the body being cleansed or cleaned.”

Psychologists believe certain people's fascination with pimple popping is the result of a number of phenomena at work — most notably, according to neuroscientist Heather Berlin, who spoke to Refinery29 about the phenomenon, the tendency of humans to crave suspense mixed with an inherent love of gross things. At least you can justify your hard-to-kick habits with science, right?

So if you're a pimple popper looking for an alternative way to get a popping fix, your solution may come in the form of a plastic slab of skin and a bottle of fake pus. The Pop-It Pal is here to change the lives of skin pickers and blemish busters everywhere.