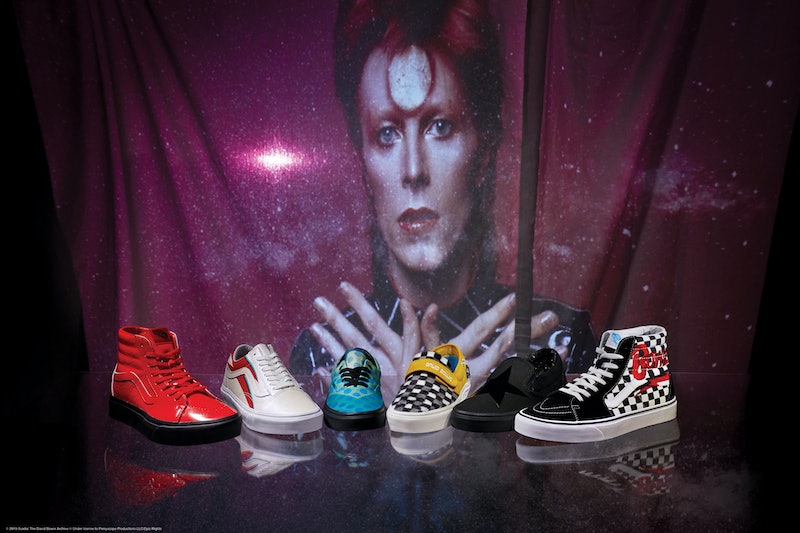 Every generation has a musical icon who people look up to, but David Bowie is one star who touched the hearts of multiple age groups. Honoring the "Let's Dance" singer, Vans is launching a David Bowie-inspired collection, and fans can line up to take a little piece of the legend (and his works) with them.

For spring, Vans is celebrating the life of David Bowie in a six-piece collection of unisex shoes. According to a press release from Vans, the line captures Bowie’s résumé of works and personas. Bowie was known for encouraging the weird to be even weirder and fans will find his world of uplifting misfits all throughout this line.

“For this collection, Vans designers were inspired by iconic Bowie imagery throughout his career from 1969’s Space Oddity all the way to his final album, 2016’s ★,” the press release states.

In the selection of shoes offered, Bowie fans will find the entertainer’s most popular works in Vans’ style of the Classic Era, The Slip-On 47 V, Sk8-Hi Platform 2.0, The Vans’ Old Skool, and the brand’s Classic Slip-on model.

The limited edition Vans and David Bowie collection ranges from $70-$85, so it's special enough to splurge. The entire line officially drops in select Vans retailers and online at Vans.com/Bowie starting April 5.

Here's everything Vans fans can expect from “the man who fell to earth.”

Vans' Slip-On 47 V is redesigned with a fuzzy black and white checkerboard print, similar to the coat seen on Bowie for the Hunky Dory album. These Bowie-inspired shoes also feature a yellow suede velcro clasp with the legend's moniker on the top.

The red patent leather these Sk8-Hi Platform 2.0 honors Ziggy Stardust, Bowie's glamorously punk alter-ego. These rockin' sneaks have a black platform sole and has Bowie lettering inside. Plus, this shoe offers extended sizing for every gender's foot.

In Vans Sk8-Hi model, fans will find the sneaker brand's checkerboard print accented with a merge of Bowie's iconic lightning bolt and the Vans side stripe.

Bowie's first hit single "Space Oddity" is the inspiration for the print on these Classic Era Vans. Vans uses blue and green hues from the song's album cover art with circular patterns to showcase Bowie's work in the sneaker brand's first skate shoe. The black sole features the album name along the inner sides of the shoe.

These pair of Vans' Old Skool are inspired by Bowie's Aladdin Sane album. The nude colored shoes have some fire to them with a leather red and blue lightning bolt meshed with Vans' side stripe

Bowie's final album, ★ is the only all black shoe in the entire collection. The vinyl motif of the album graces the tops of the slide-ons while the outer side of the black sole also features an imprint of black stars. Plus, the inside of the shoe is accented with a print of a star galaxy to honor Bowie's legacy.

In addition to these wildly awesome sneakers, Vans is also coming out with a five-piece apparel and accessories capsule. Featuring two snapbacks and three graphic tees, the collection derives its inspiration from the Aladdin Sane and Ziggy Stardust album covers, plus the icon's Serious Moonlight tour.

There won't be any forgetting of this powerhouse's stardom with this launch. It's nearly impossible if you're his entire discography on your feet.