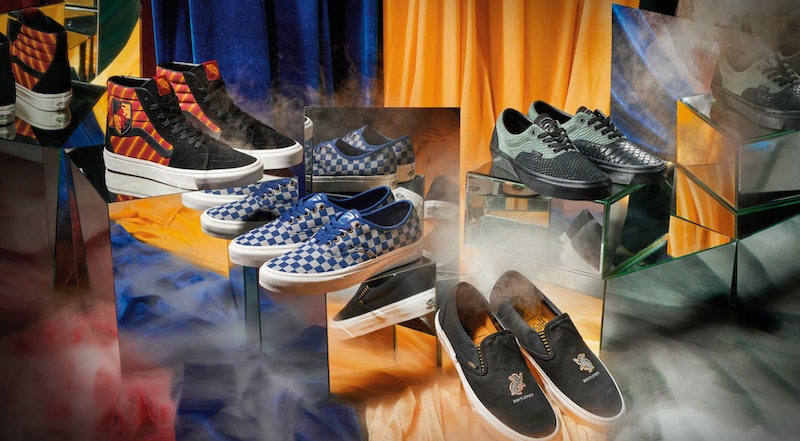 Harry Potter fans have always had access to a great deal of merch. There is a huge selection of official merch available online, as well as IRL in The Making Of Harry Potter at Warner Bros. Studio Tour London (if you've not visited yet, get on down there, pick your wand, and have a cup of butter beer, ASAP). Some of your favourite brands have also worked with HP to create some seriously cool stuff; the most recent being Vans. Here's everything you need to know about the collection, including where to buy Vans x Harry Potter in the UK.

Vans first teased their Harry Potter line back in April. The brand shared a short gif, alongside the caption: "Something magical coming soon: vans.com/harrypotter." The brand has released little on the collection since, but we now have now had our first preview of what the shoes will actually look like.

My personal faves are the black Classic Slip-Ons, designed for Hufflepuff. They are the most understated, simply featuring the badger from the Hufflepuff crest.

The boldest design is probably the Sk8-Hi for Gryffindor pair. Featuring a high top design, and bold orange stripes with the Gryffindor crest, these make a statement.

The Slytherin pair of Vans Eras could not be more bang on, with a snake skin texture and green and black hues. Finally, the Ravenclaw Authentic Vans trainers are designed in a checkerboard style, with the house's official colours (blue and bronze).

While the four styles are undeniably cute, and there's a pair in there for each of us, if these don't take your fancy, fear not; there will be more to come. Vans has announced that to complete the collection, they will announce additional footwear styles alongside a selection of men’s and women’s apparel and accessories in due course.

As of yet, unfortunately we do not have an official launch date for the collection, but you can sign up to the website's waiting list to be notified when something happens. I have reached out to find out where us Brits will be able to shop it, and despite not having a launch date yet, it has been confirmed that the range will be available to buy on Vans' official website, as well as in Vans' bricks and mortar stores.

For now, all we can do is sit and plan which pair of the four Vans x Harry Potter styles we will be throwing our hard earned cash at. While some of us will just go with the pair we like visually the most, OG fans and traditionalists may like to stick to the shoes from their respective houses. Not sure which house you belong to? Take the quiz on Pottermore now. You're welcome.