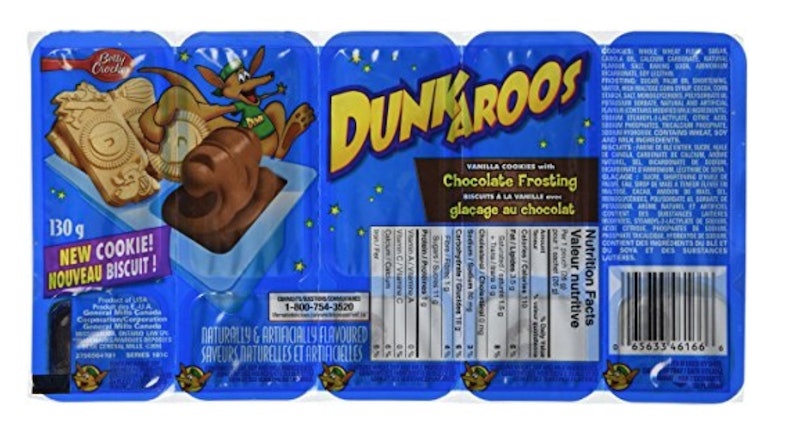 In the early '90s, much before many of us could even conceive of any complex feeling beyond "YUM," Betty Crocker gifted us with a wonderful creation: Dunkaroos. They were the most wonderful cookie snacks a being could behold; they consisted of a snack-sized package containing ten small cookies that you could dunk into a minuscule coating of icing (granted, I was one of the rebels that didn't do such a thing, eating the icing straight from the container).

These snacks haunted some of my dreams as a youth, and I, along with other millennials, have wanted to know: where can you find Dunkaroos on today?

Unfortunately, according to General Mills, Dunkaroos stopped production in the U.S. in May 2012; semi-fortunately for people in the U.S. craving that sweet, sweet dunk, it's still possible to get your hands on some through online ordering on sites like Amazon and Buffalo Sponge Candy, and also through, well, smuggling them from Canada.

At least, you used to be able to smuggle them from Canada — in fact, in 2016, General Mills was actively encouraging it. They launched the now defunct site Smugglaroos website to connect Canadians who felt bad for dunk-less Americans.

"Childhood was a beautiful time, filled with big hair, VHS tapes, hammer pants, and (most importantly) Dunkaroos," the website read in 2016, according to Teen Vogue. "Everything was perfect. But much like the delicious cookies and icing, our youth couldn’t last forever. In 2012, the last pack of Dunkaroos was sold in America. The very year the world was predicted to end—and it might as well have. Outrage immediately swept across the Dunkaroo-loving community."

And thus, Canadians traveling across the border to the U.S. could sign up to "smuggle" the discontinued Dunkaroos to the adults that were dying for a taste of nostalgia. Was it a user-sharing service website, similar to the likes of Uber or Airbnb? Yes. It allowed Americans and Canadians to sign up as volunteers to receive or deliver Dunkaroos in the US At the time; General Mills told The Globe and Mail there were reports of "cross-border shopping... people were posting that Americans could purchase Dunkaroos online for grossly inflated prices. It was a wake-up cal l… There is still an affinity for this product.”

But since Smuglaroos is but a distant daydream now, you'll have to literally risk it for the biscuit in a different way — here are some options.

Some third party sellers are shipping out Dunkaroos imported from Canada; granted, the prices are kind of steep (the vanilla version is running for $19.99 right now, which, yikes). Fortunately, they're not the only ones in the market.

A more cost-effective option, this company is also shipping Dunkaroos to the U.S.; it's worth nothing, though, that at the time of publishing, they only have the chocolate version in stock.

Hopefully between one of those two options, you'll find something to help you follow your dunking bliss.

Anyone who was conscious enough to remember will probably get instant memories when they see Dunkaroos' animated mascot, the kangaroo, hop onto the screen. Let us take a trip down memory lane, to a simpler time ...

The General Mills blog also has some fun insights for those who want to learn more about the history of these snacks. As a millennial on the younger side, I barely remember this, but the kangaroo mascot was originally named Sydney and voiced by John Cameron Mitchell. A 1996 contest seeking consumer insights called "Dunk-a-Roos Kangaroo Kanga-Who Search" resulted in rebranding Sydney as "Duncan the Daredevil," otherwise known as "Dunk," according to the blog Walk Down Memory Lane.

In other nostalgia-related news, the Betty Crocker site has also whipped up some spinoff recipes inspired from Dunkaroos. You can make your very own Vanilla Dunkaroos Sprinkle Cake based on this recipe. Looks yummy, for sure.

And in case you're looking for some weird off-brand fusion versions of Dunkaroos, apparently Target and Walmart sell something that resembles Oreo Dunkaroos. They're called Oreo Cookie Sticks 'N Creme. You can literally dip these cookies into the creme, and bam. Same effect as the "dunk" in Dunkaroos. Who knew?