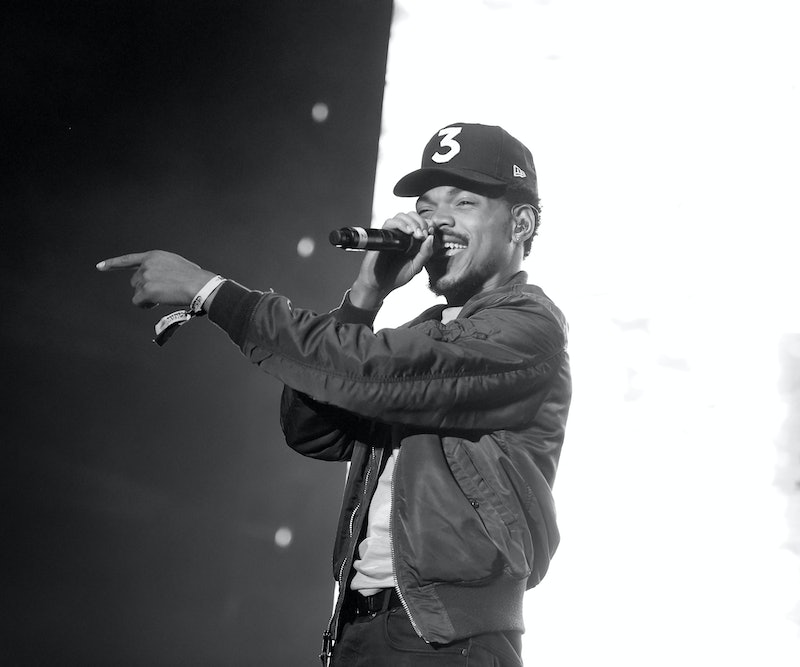 Times are tough, everyone. Less than two weeks out from the inauguration of Donald Trump, and things are still pretty scary. However, if you want to lift your spirits, you can take heart while you rock Chance the Rapper's Thank U Obama merch. The collection of President Obama-themed merchandise has been restocked, and now, to soothe the pain we're all still feeling at the loss of such a great first family, you can thank them via fashion for the world to see.

The line, created by designer Joe Fresh Goods and modeled by none other than Chance the Rapper, does exactly what the title says. It's filled with retro collegiate looks that are stylish shout outs to the 44th president of the United States. If you want to shop it, you can snag the merch over at the Thank U Obama website. Act fast, though. The pieces actually launched in January, sold out quickly, and were restocked Thursday afternoon.

Designer Joe Fresh Good says that he was inspired by his emotions the night President Obama won his first term. On the site, he explains, "The night Obama won his first term gave me so much hope, especially & most importantly as a black man. I decided to make a collection saying "thank you" and give me something to smile at every now and then when I look in the closet."

What kind of styles are in the collection? They're totally a totally cool throwback and an homage to the Obamas, their relationships, and their interests.

President Obama's love for basket is no secret, and that's what makes this piece so great.

If you admired the grace and intelligence of First Lady Michelle Obama, this tee is for you.

Want to support the Obama girls? Here's how.

While both the Thank You Michelle and Message To Malia tees are on back order, there is a message that the pieces will be processing and shipping in one to two weeks. All hope is not lost to shop Joe Fresh Goods's creation. Act fast, though, because they're going fast.