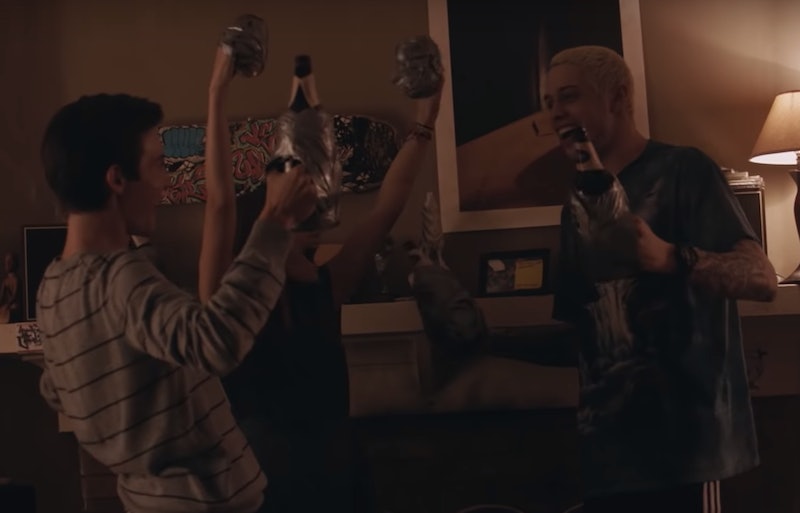 Pete Davidson is finally making the jump from starring on Saturday Night Live to starring in feature films, and his first major role comes via Big Time Adolescence, an indie coming-of-age comedy. The streaming-exclusive feature is set to premiere to audiences everywhere very soon, so here's our quick and dirty rundown on how and where to stream Big Time Adolescence.

At the center of Big Time Adolescence is Mo (Griffin Gluck), a high schooler who hangs out with his sister's college dropout ex-boyfriend, Zeke (Davidson). Mo's struggling a bit in the popularity department, which is why he chooses to spend his time with Zeke and his friends, much to the dismay of his parents. Poor decisions are everything in Big Time Adolescence, which sets itself up to be a seemingly charming coming-of-age film.

If any part of that description speaks to you, you can stream it on Hulu. Alternatively, if you're lucky enough to live in one of the cities hosting it, you can catch Big Time Adolescence in theaters for a limited time.

As mentioned, Big Time Adolescence is a hit with critics. It's currently sitting at 89% on Rotten Tomatoes. Many critics are lauding Davidson's performance, including his buddy-buddy chemistry with co-star Gluck.

Following up Big Time Adolescence, Davidson will return to the big screen on June 20 with The King of Staten Island, a semi-autobiographical film he co-wrote with director Judd Apatow. Initially set to premiere this year at SXSW before the event was cancelled, The King of Staten Island is about Davidson's life growing up in New York, and the struggles that made up much of his mid-20s. According to the SXSW description of the film, Davidson plays Scott, a man whose firefighter father died early on in his life. With his sister heading off to college and his mother dating again, he acts out, spending all of his time smoking and hanging out with his girlfriend. But eventually, he has to find a way to move on, and to do that, he'll have to confront the grief that's been plaguing him.

All considered, this year's shaping up to be a pretty big year for Davidson and his fans, who can now look forward to two major movie releases starring him this year. If you're looking for more from the funnyman, you can also check out his new Netflix comedy special, Alive From New York.

More like this
11 Movies To Watch At The 2023 Sundance Film Festival
By Chloe Foussianes
Here’s Everything Coming To & Leaving Netflix In February
By Jake Viswanath
Pamela Anderson’s Dating & Marriage History Could Be Its Own TV Series
By Jake Viswanath
Yes, You Can Stream ‘To Leslie’ In The UK Now
By Sam Ramsden
Get Even More From Bustle — Sign Up For The Newsletter
From hair trends to relationship advice, our daily newsletter has everything you need to sound like a person who’s on TikTok, even if you aren’t.