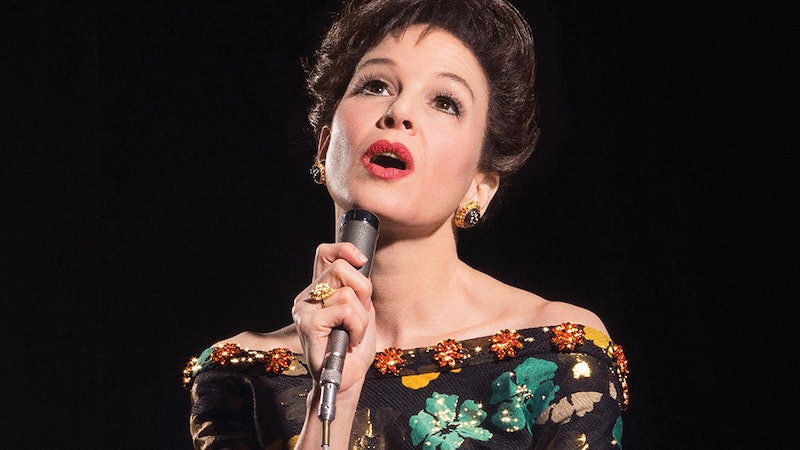 Judy Garland was a once-in-a-lifetime performer. But her high career highs, were met with even lower personal lows. In the new biopic, Judy, audiences get a peek inside the troubled last year of Garland's life, which she spent in London trying to overcome her demons and get out of financial ruin. In it, Garland is played by Oscar winner Reneé Zellwegger, who is once again up for Best Actress at the Academy Awards for her work in the film. Zellwegger already took home a Golden Globe for the performance, and is the front runner to win the Oscar. Here's where to stream Judy, so if and when Zellwegger gets the gold, you'll know it was deserved.

While the film isn't currently available to stream for free, it is easily available to rent on any number of services. Fandango, iTunes, Redbox, Vudu and Flix all have it for $5.99, with Microsoft offering it for $4.99.

But the film is more than worth the rental fee. Zellweger's portrayal of Garland shows a woman at the very end of her rope. A mother who's separated from her beloved children and forced to take a residency in London to make ends meet. While Garland wants to be a good mom — and become a star again — she's unable to evade the prescription pills and alcohol she's abused for the majority of her life. It's a harrowing look into the less-than-glamorous side of child stardom, and Zellweger captures Garland's emotional state with a chilling accuracy.

But the film takes some liberties with the truth. It was based on the play 'End of the Rainbow', and wasn't approved of by Judy's daughter, Liza Minelli. There are also a few fictional characters included in the film: like a gay couple she befriends in London — an homage to Garland's enormous popularity within the gay community — who show her kindness in what she finds to be a lonely city.

The film has received mixed reviews, but one thing is for sure: Zellweger's performance is the stuff of legends.