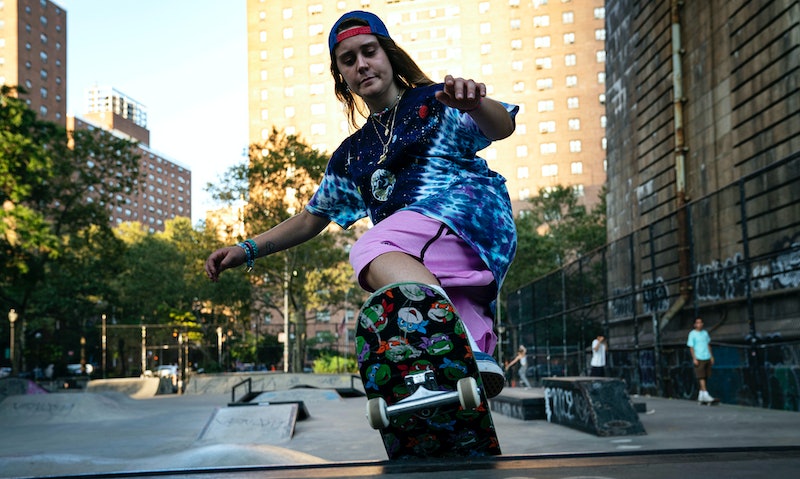 Crystal Moselle's 2018 film Skate Kitchen follows a group of female skateboarders trying to break onto the scene in New York. It also features the same cast as Betty, a TV series premiering May 1 on HBO. Along with Moselle, the series was co-created by comedy writer Lesley Arfin, who's known for her work on Girls, Brooklyn Nine-Nine, and for co-creating the series Love. For those who want to watch the show's predecessor before diving in, you can stream Skate Kitchen on Hulu, or rent it on Amazon Prime, Google Play, or iTunes, among other places.

It all started in 2016, when Moselle overheard Nina Moran talking to Rachelle Vinberg on the G train in New York. "I was instantly drawn to their dynamic," Moselle told W Magazine. "They had skateboards and Nina was telling some funny story, maybe about the first girl that she made out with, something sensational. I followed them off the train and kind of went up to them and asked if they'd be into doing a film project at some point."

Their first collaboration was the 2016 short film "That One Day," created for the fashion brand Miu Miu. The current Sundance Director of Programming, Kim Yutani, was so impressed by the film that she encouraged Moselle to make a feature-length movie with the girls, according to Teen Vogue.

And while their names have been changed, the movie is largely inspired by their lives. The story follows Camille (Vinberg) as she runs away from her Long Island home after her mom discourages her from skateboarding. Jaden Smith plays Camille's love interest, Devon, and her fellow Skate Kitchen members (the inclusive skateboarding collective she and her friends founded) play fictionalized versions of themselves: Kabrina Adams (who now goes by Moonbear) is Ruby; twins Brenn and Jules Lorenzo portray Quinn and Eliza, respectively; and Ajani Russell plays Indigo, to name a few.

"Crystal pretty much followed us around and hung out with us for a few months, getting to know us, taking notes," Ardelia "Dede" Lovelace, who plays Janay, told Teen Vogue. "That's how some of the scenes came about in the film. Pretty much the whole movie is based on our lives."

To Moran, who plays Kurt, it didn't even feel like acting. "Honestly, filming the movie just felt like we were having a summer, and we were just skating around with a camera recording us," she told Teen Vogue. "[M]y character was so close to my real personality that it didn't really feel like I was acting."

The movie was well received by both critics and audiences. "When people saw Skate Kitchen, they would tell me how they just want to live in their universe forever," Moselle told The Face. Now audiences can.