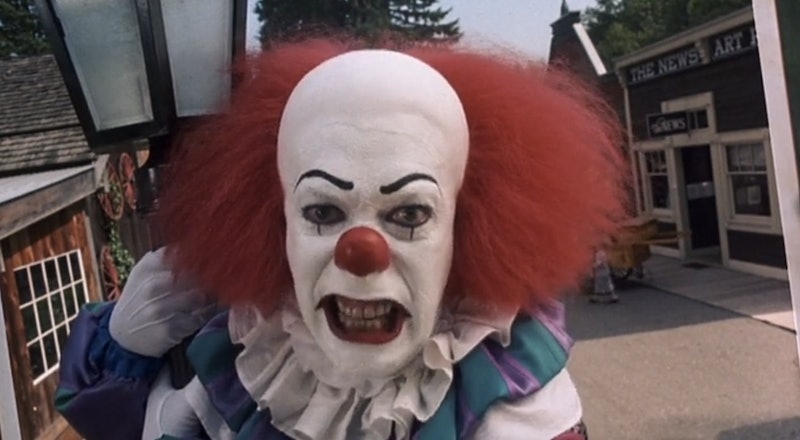 The 2017 movie It ends with a promise: the Losers Club would come back to Derry and fight Pennywise in any form It took if It ever reemerged in their small Maine town of Derry. Seeing as It Chapter Two is slated to hit theaters Sept. 6, it looks like the now-adult Losers Club is going to have to make good on their vow. While the feature films have split up the tween and adult Losers, the 1990 It miniseries weaves their stories together, flashing back and forth. So to prepare yourself, you may want to stream the It miniseries, the first adaptation of the story that indelibly stamped the terror of Pennywise onto the minds of a previous generation. Mild spoilers ahead.

Unfortunately the original version, which featured Tim Curry behind the makeup (and fangs) of the ghoulish sewer-dweller, isn't currently available to watch via subscription streaming services. If you're willing to shell out a few dollars to watch it from the comfort and relative safety of your own couch, it is available to rent from Apple, Google, Playstation, Amazon, YouTube, Vudu, and Microsoft for $3.99. If you want to buy it though, best to stick to Playstation — they're charging $9.99 to every other service's $14.99, and though all other versions claim to be HD, I can't find information the show was ever upgraded from its original SD broadcast stats. (The original aired on ABC.)

Much like the 2017 feature and upcoming 2019 release, the original 1990 miniseries crams and splits author Stephen King's massive 1986 tome into two parts, the past and the present. Both versions also notably elide King's infamous child sex scene as a solution to stopping It, though the 2017 film includes a post-battle kiss between Bill and Beverly — a far less intense nod to King's original idea as posted on his website's message board that sexual acts bridge childhood and adulthood.

There's enough other differences in story to keep fans of the films on their toes — though the general idea is the same (children battle evil entity, vow to fight it again as adults, come back and fight it again as adults), small differences like the fate of bully Bowers and what happens to young Bill during their (seemingly) final fight create shifts in tone and emphasis that will give fans a new outlook on a familiar world.

There's also the change in tone and attitude that comes with an entirely different cast, and while new audiences might not appreciate the original miniseries' adult cast's deep ties to television nostalgia of the time (it's doubtful anyone beyond Gen X would feel a tug seeing the actor who played John-Boy on The Waltons appear as a grown man to fight his childhood past), the performances of both the child and adult actors hold up.

It's also a sneak peak at what's to come in Chapter Two. Though, as this incarnation swerved from the book, it's likely the new film will also take some liberties with the source material, resulting in the same sort of near-but-not-quite differences and similarities of 2017's It and part one of the miniseries. As the entire run of the miniseries is a mere three hours (absolutely nothing compared to today's marathon watches), there's time enough to catch up on the O.G. Losers Club before the new film hits theaters.