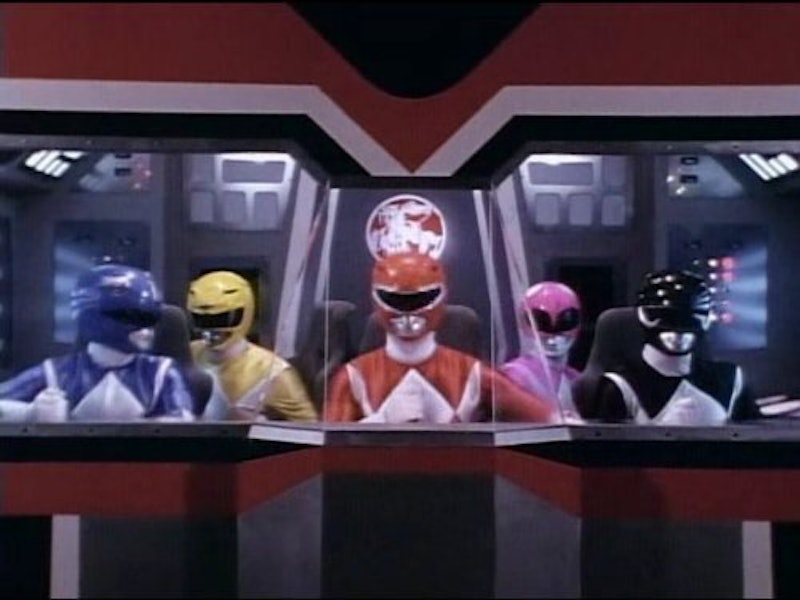 Among the many rebooted childhood television and movie favorites that Millennials have been blessed with in recent years, the upcoming Power Rangers movie feels particularly important. For one, the new version will featuring an openly queer Yellow Ranger, which is pretty exciting for LGBTQ fans. The Power Ranger reboot also seems notable because of just how freakin' 90s the original series really was. It makes me wonder how they're going to possibly make this new story (and costume design) feel fresh and contemporary, while also spurring in me a longing to revisit the bananas, super-dated original series. Fortunately for me and for you and for anyone who once had Power Rangers pajamas, there are a few places online where you can watch the original Power Rangers.

You can find tons of offshoot Power Rangers series on Netflix, but I know that what we all really want is the original, and fortunately, Netflix delivers on that front too. The original three-season run of Mighty Morphin Power Rangers can indeed be found on Netflix. Be warned that it's a little confusing, though: the series is dated as being from 2010, which really threw me off when I first saw it. But don't worry, that's just because they did a first-season "re-version" in 2010 that improves the visual quality of many of the original episodes. It's not a remake, and it's not a sequel. Netflix has all three original seasons, a whopping 145 episodes, as well as the re-version series. So many hours of sweet, sweet '90s fashion, ridiculous fight scenes, and not-exactly-high-tech special effects.

Gosh, it really is wild to think about how long ago it was that my siblings and I were in footie PJs laying on my grandma's shag carpet, watching Power Rangers on her big glass tube-TV. The original Power Rangers series, the one that started the whole franchise, was officially called Mighty Morphin Power Rangers, and ran for three seasons on Fox from 1993-1995. From there, a film, tons of merchandise, and countless shows on shows were all spawned, because, let's be honest, kids were totally obsessed with those colorful morphin' fools.

And if you're not a Netflix person but are still dying to check out the original show to see what I mean, there is another option, and that's Amazon. But you should be prepared to pay. Each episode is $1.99 to stream, which comes out to be a hefty sum of money with all those episodes, even when you factor in the discount you get for buying a whole season. In my humble opinion, the per-month cost of Netflix streaming is way more worth it, but I don't know your life, and buying whole seasons of Mighty Morphin Power Rangers to stream on Amazon could be the right option for you. No judgement.

Now that you know where you can go to watch the original Power Rangers series, the biggest question left is what will happen if you realize you're not the Ranger color you thought you were. Existential crisis?

More like this
The OG Power Rangers Are Returning For A Spandex-Clad Special
By El Hunt
This 'Gossip Girl' Wardrobe Error Has Gone Viral On TikTok
By Alyssa Lapid
Hilary Duff Is “Optimistic” About A 'Lizzie McGuire' Reboot
By Alyssa Lapid
'Friends' Star Maggie Wheeler Offers Support To Matthew Perry After Reading His Memoir
By Alyssa Lapid
Get Even More From Bustle — Sign Up For The Newsletter
From hair trends to relationship advice, our daily newsletter has everything you need to sound like a person who’s on TikTok, even if you aren’t.