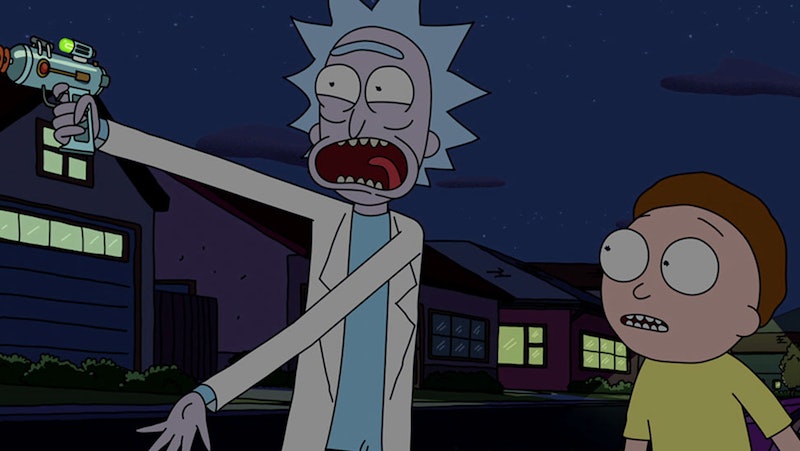 It's time for Rick to sweep his grandson Morty away on more travels through the multiverse. Rick and Morty Season 3 is here, and that's a pretty huge deal, considering how long the wait has been. For anyone who isn't familiar with the show, Rick and Morty follows aging scientific genius Rick, who moves in with his daughter's family, subjecting them to his inventions and whims. When not working on a new project, Rick takes his grandson Morty on various misadventures. Since it debuted in 2013, the Adult Swim series has become a cult hit, and it's hard not to be deeply invested in the show's characters. Patient fans have waited a long time for Season 3, and it was finally released on Saturday, April 1. Fortunately, the episode was no prank, and here's where to watch the Rick and Morty Season 3 premiere to catch up on the beloved series.

If you looked at that April Fool's Day date and raised an eyebrow, thinking the episode might not be real, that's what the show creators intended. Dan Harmon (creator of Community) and Justin Roiland love to torture fans, and teased the Rick and Morty premiere on Twitter for weeks without sharing any real deets. In typical Harmon and Roiland fashion, the episode dropped on Saturday with very little warning. It's now online in all its glory, and it can be watched on the Adult Swim website.

While the new episode is sure to satisfy the most rabid fans for now, it may be a bit before the rest of the season is available. After the premiere episode was released, the showrunners announced on Instagram that the new season would come in the summer. The clip doesn't offer an airdate, but the series will be here with the warm weather before you can say "Pickle Riiiiick!"

If you're too antsy to wait for the new episodes, reaching out to Harmon on Twitter is always an option. The show's devoted fanbase has a tendency to harangue the creator online, begging for a sooner release for new episodes. Watch out, though, as before the premiere on Saturday, Harmon took a moment to sass fans right back. After posting a funny pic from his flight, Harmon responded to a fan who demanded the new episode with this.

Not moments later, the new episode premiered on the Adult Swim channel along with a marathon of old episodes. Ask and you shall receive! (Although perhaps consider asking a bit more gently, as you don't want Harmon to hold those episodes hostage).

In the meantime, while you wait for a full Rick and Morty season, catch up on past episodes. Every installment from Season 1 and 2 is streaming on Adult Swim's website, and reruns regularly air on Cartoon Network. Good things come to those who wait — and wait and wait — so revisit old eps, and the new season will arrive on a summer breeze soon.