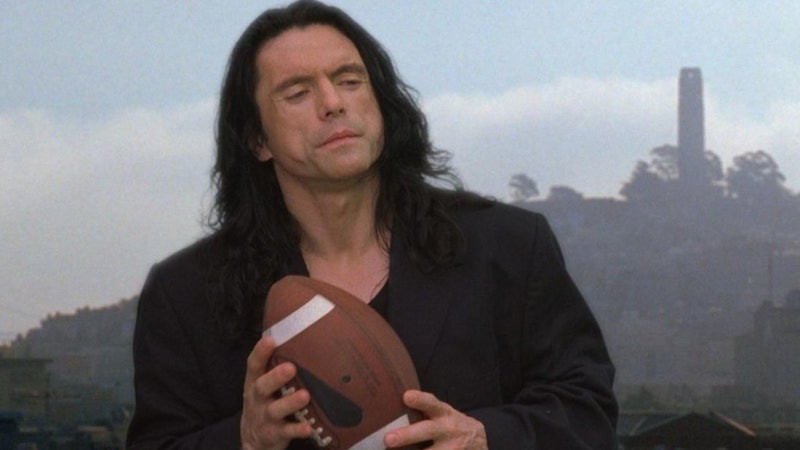 James Franco's been working on a lot of cult remakes recently, but his latest project The Disaster Artist, which chronicles the making of the infamously bad movie The Room, takes his obsession with others' obsessions to the next level. If you're not familiar with the gonzo independent film written by, directed by, and starring the enigmatic Tommy Wiseau, here's where to watch The Room, so you can be all caught up before The Disaster Artist hits theaters.

The Disaster Artist, out Dec. 1, follows Wiseau as he sets off to make his personal masterpiece,The Room. The film eventually becomes a hit... but only after earning the title The Worst Movie In The World. The Disaster Artist opens with Wiseau, played by Franco, meeting Greg Sestro, played by James' younger brother Dave Franco. The two become friends, and set plans in motion to make The Room, Wiseau's dream script, a reality. At that point, Wiseau had already tried pitching The Room as a play, then turned the play into a 500-page book. There were no takers for either format, so Wiseau hit on the idea of making a film, which he would produce to have total control over the project.

In what can loosely be termed a plot, The Room is the story of Johnny (played by Wiseau), a banker living happily with "future wife" Lisa (Juliette Danielle). Lisa, bored and unhappy, incites an affair with Johnny's best friend Mark (played by Sestro, who also helped produce the film). A neighboring kid Denny also has the hots for Lisa, which for some reason he tells Johnny about, and so Johnny calls on psychologist friend Peter to help sort things out. Peter defends Lisa to Johnny, but also calls her a sociopath to Mark, who then tries to kill him. There's also plenty of good, wholesome football tossing and mind-melting dialogue like this:

Mark: How was work today?

Johnny: Oh, pretty good. We got a new client and the bank will make a lot of money.

Johnny: I cannot tell you; it's confidential.

Johnny: No, I can't. Anyway, how is your sex life?

...Yeah. The budget for the film was somehow over six million dollars, with the majority spent on advertising and promotion. It grossed about $1,800 in its theatrical run before getting pulled, but during its last days, according to Worldsstrangest.com, director Michael Rousselet caught it in theaters. He found it so funny, he brought friends to see it with him, and the friends in turn did the same, everyone absolutely gobsmacked by The Room's existence. After the film closed, these new converts wrote to Wiseau telling him how much they liked his movie. Wiseau, glad to hear someone did, set up a midnight screening, and thus the phenomenon of The Room was born.

Unfortunately, midnight screenings are one of the main ways to catch The Room; possibly due to Wiseau's strict control, the film is not available on streaming services. You can catch it on DVD or Blu-Ray, but trust me — Blu-Ray's high definition will not help or enhance this viewing experience. The best way to go is to see it in person, surrounded by a Rocky-Horror style atmosphere of tossed spoons, footballs, and women in red dresses tearing things apart. The Room screens pretty regularly in a number of major American cities, and even has Canada and Europe on its upcoming "Love Is Blind" tour.

It may be less convenient, but you owe it to yourself to see a film famously dubbed "the Citizen Kane of bad movies", and described in a Vox interview as "like a movie made by an alien who has never seen a movie, but has had movies thoroughly explained to him" by Tom Bissell, co-writer of the book Franco's film is based on, The Disaster Artist. Trust me, you won't forget the experience.