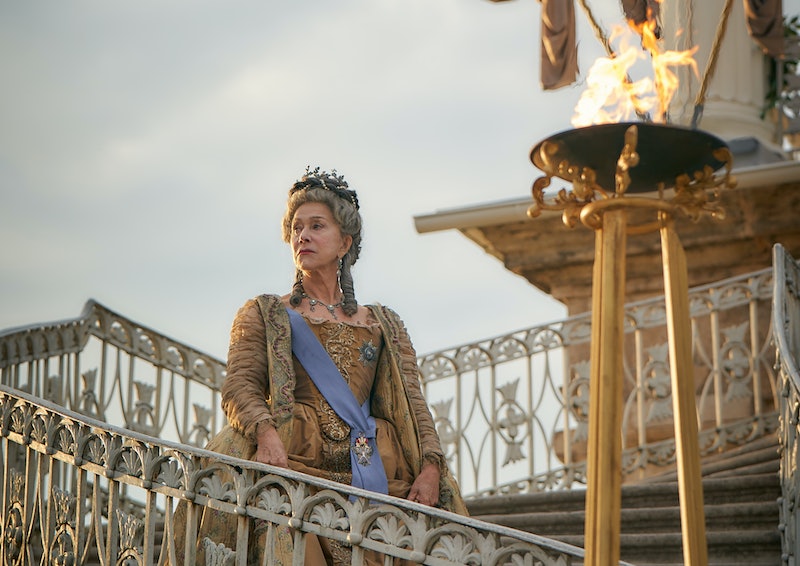 If you're still patiently waiting for the third season of The Crown, HBO and Sky Atlantic have got your back. In this royal series, viewers will see Helen Mirren play Catherine II, Russia's longest-ruling Empress. In the trailer, the focus seems to be mainly on the ruler and the spectacular palace she resides in, with some snippets of Catherine on the battlefield and shots of the Russian wilderness. So where was Catherine the Great filmed?

As IndieWire noted during its production, the limited-series was shot "across Russia, Latvia, and Lithuania", giving Catherine the Great an added layer of authenticity. As Catherine II ruled from Saint Petersberg, it's no surprise that some of the filming took place in the former capital. This included the Peterhof Palace, which was used for the first time Catherine set eyes on Gregory Potemkin, and also doubled as "Gatchina Palace, for Prince Paul's palace; and the Yusupov Palace, for the theatre scenes in episode two," according to iNews.

Although, the palace in which she resided was in Pushkin, south of the city. And as iNews writes, "[s]ome settings just can't be recreated, so the real thing was used." Catherine Palace, which is the grandiose blue building seen in the trailer, was where the majority of filming took place for the series.

Mirren herself has a deep connection with Russia through her grandfather. As a "veteran of the Imperial Russian Army and former diplomat who left Russia during the Revolution," filming in the country had a profound effect on the actor — especially at Catherine Palace. "I just wandered off away from everyone, down a corridor, I'm dressed as Catherine — the wig, the gown, everything," Millen recalled to iNews. "[A]nd I stood looking out of a window she would have looked out of. It was completely extraordinary."

Despite the story of Catherine the Great taking place in Russia, the majority of filming actually took place in Lithuania, as production resource Kemps Film, TV & Video notes. This was further confirmed by iNews, who points out that the country's locations "doubled up for some of the regal settings," including The Pazaislis Monastery which "was used for the soldiers' barracks, the mortuary and Catherine's son Paul's coming of age ceremony".

Several locations in Vilnius were also used for interior shots, "including the council rooms and Catherine and Prince Paul's rooms."

The Baroque Rundale Palace in Latvia also features in the series, which according to iNews was used for "exteriors, corridors, Countess Bruce's quarters and for the fancy cross-dressing ball at the end of episode one".

The filming locations for Catherine the Great are similar somewhat to the HBO/Sky Atlantic production Chernobyl, which was also based mostly in Lithuania as well. It's capital Vilnius, which was used in both series, has become a must-go-to travel destination for many tourists as of late.

Described by The Telegraph as having a "warming sense of history, bewitching architectural heritage and bustling cafe culture," series like Catherine the Great and Chernobyl only capture a small part of this city's beauty.